Actually, the RV is a converted bus. A converted school bus. A big, yellow 40-year-old refugee from Fresno Unified School District. One of those flat-front Crown school buses slowly disappearing from the California landscape.

I know that at some point in a person’s life one usually makes such a purchase. I know that I should be thankful that it wasn’t a Viper. Or a Harley. Or worse.

The bus-to-RV thing was sitting at a transmission repair place looking for a home several years ago. My husband suggested ours. We didn’t really have enough money. I sighed in relief when the bus-to-RV thing disappeared before my husband could figure out what furniture to sell in order to buy it.

But several years later, the bus-to-RV thing reappeared at a storage place a few blocks down. It was looking for a home again. I hoped my husband wouldn’t see it.

Too late, he was already on the phone negotiating with the owner. He was doing well, offering 15 percent below the asking price. The owner’s counteroffer was twice the original price.

Reason eventually prevailed, given that one might find it reasonable to pay good green money for a yellow bus.

I must admit the bus-to-RV thing has been a boost in perspective to friends in similar circumstances. One friend said, “I’ll never bother Monte again. At least the Harley fits in the garage.”

Yes, the bus-t0-RV things is big. I’ve always wanted to be able to see my home from an airplane. Last spring, coming home from Albuquerque, there it was: a 37-foot-long, 8-foot-wide, white-topped beacon. I still couldn’t see my house, but I knew that was my bus-t0-RV thing.

The bus-to-RV thing is a good conversation starter. Friends ask, “So you must like to camp?” That’s usually my husband’s cue to talk about all the fun things you can do while camping. Things we actually haven’t done yet, but we just might, any day now.

My idea of a vacation is not to haul the house with me. I get enough of that cooking-cleaning-driving thing at home.

My husband and I are going to Hawaii for a week in August. Obviously, we won’t be able to take the bus-to-RV thing. I’m looking forward to staying at a place where someone else cleans the room and cheerfully cooks a delicious farm breakfast for us every morning.

Also, in Hawaii, you can rent those sports cars you otherwise could never afford to buy. I’m going to tell my husband that I’d look really sweet driving a Viper. 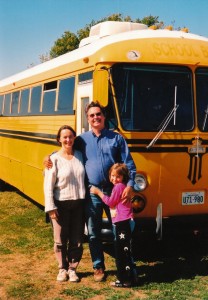 Me, Mark, Paige and The Bus