This essay first appeared in the Denton Record-Chronicle July 28, 2005

I just delivered the good news to my dog, Gus, after my trip to the Hill Country to visit his mama (and her owner): He’s an Official State Dog.

Not Gus himself, of course, but his kind, the Blue Lacy and that’s OK, be cause we’re not into public appearances.

Last year, his mama wore white spots and rode on top of a fire truck, serving as the Blue-mation mascot for the Harper Volunteer Fire Department in the town parade. That brush with fame was close enough. The prospect of a Texas trooper waving us through when Gus is in the car conflicts with our egalitarian sensibilities.

But thanks to our wildly productive Texas Legislature, the Blue Lacy Game Dog is now the Lone Star State’s designated canine. The short-haired breed was developed in the mid-1800s by the Lacy family, the same folks who gave the pink granite so the state could build a proper capitol. Like most of his kind, Gus is not really blue. He’s yellow all over, with a white blaze on his chest. Other Lacy dogs are red with a blaze or like his mama, who’s a chocolate brown. 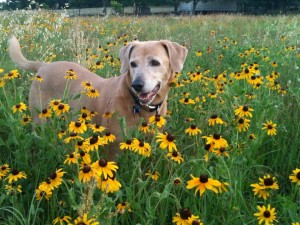 Since she’s getting kind of famous, what with the parade appearance and all, her youngest pups are looking sharp these days. Gus’ little brother has the characteristic blaze on his chest, and he also has white socks and star on his head.

We had two other, mixed-breed dogs before we got Gus. They are pleasant fellows. However, now that the kids are getting older, they are beginning to outlive their purpose, which was finding old french fries in the car. I convinced my husband that, with our orchard, we needed the dog that old-timers claim does the work of five cowboys.

Gus is a good, all-around, working dog and almost lives up to that tall Texas tale. He can run off crows, tree squirrels and deter other varmints.

Mindful of our underground drip irrigation lines, I whisper in his ear about his mama, who catches gophers. Like a first-term state representative, his heart is in the right place when he picks up the scent, but he mostly just churns up a lot of sand.

Gus is medium-sized, so he sometimes fits under the dining room table without being noticed. His motivations to be there are not pure. When he is noticed, he is usually banished with the “go to place” command. Gus knows a lot of commands, and his favorite is “get ’em up,” which we never say when the school bus arrives, but he acts as if we do.

Gus will never be in those fancy dog shows. We know that pitting his sort against others that are all hat and no cattle isn’t sporting. Some folks are organizing field trials for Lacys. Gus can herd our chickens and goats. They get out a lot, because the same kids who used to lose their french fries now have trouble hanging on to their 4-H projects. The chickens can be skittish and the goats try hard to ignore him, but he’s joyfully tenacious.

The kids got excited about the state dog thing, but it didn’t last. What they really need are new textbooks and a school finance plan.

I think we’ll point our blue dog toward the pink Capitol and proffer his favorite command: