Shahla and I had a book signing a week ago. Donna Fielder, a wildly successful Denton author, encouraged me to talk to the owners of the newest book store in town, Patchouli Joe’s, to see whether they were interested in hosting an event for us like they did for her. It took a while for me to screw up the courage, but once I did, they were as gracious as Donna described.

Shahla and I didn’t know quite what to expect, but we prepared for the gamut, from doing a formal reading before a crowd of strangers to sitting quietly in the hopes that at least one or two book buyers stopped by. Turned out, many friends and family came and we had a different kind of crowd. Suddenly, a formal reading didn’t seem right, so I asked if anyone had questions. We were off and running. After about an hour, we were getting tired, so Shahla deftly ended the Q&A. A few people lined up to get books signed, but most lingered, browsing the shelves and chatting with each other. 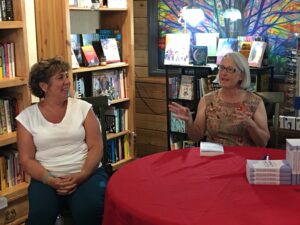 Shahla and I answer questions about our new book at Patchouli Joe’s in Denton. Photo by Annette Fuller.

Up until then, Sam had been sitting behind us in a comfy wing chair. When he recognized that it was mix-and-mingle time, he popped up from the chair and started walking around the store, introducing himself and chatting with people. I couldn’t help but smile. That afternoon, Sam was doing much better than I was in being a social butterfly.

Here’s why. Years ago, he joined a local dance club. He learned Eastern swing dance steps, met lots of new friends, and waited patiently for women to ask him to dance. He was out in the community in this highly social way at least once, usually twice, a month. As the pandemic has waned, the dance club is slowly rebooting and he’s been out dancing again. He’s enjoying the return of social sparkles.

When Sam was little and learning to imitate and to talk, I thought we were going to have to break down all kinds of skills into incremental steps in order for him to learn. But once he learned to talk and to imitate, that elevated his ability to “learn to learn.” Suddenly, we didn’t have to break things down anymore. I never fully understood that phenomenon until Shahla explained behavioral cusps: once a person masters a skill or environment, that often leads to picking up other kinds of skills and expanding opportunities. Sam absorbed a variety of social skills while learning to dance.

Not everyone is the same. For example, I’m not sure that joining a dance club would boost my introverted ways. But, finding and achieving a cusp is something powerful to think about when you feel stuck. We touch on this concept several times in the book. Working toward a behavioral cusp can help us achieve progress and sustainability in our parenting. We all learn this way our whole lives–it’s one of humanity’s super powers.

P.S. Where to buy our new book, Responsible and Responsive Parenting in Autism: Between Now and Dreams

The world will break your heart ten ways to Sunday. That’s guaranteed. I can’t begin to explain that. Or the craziness inside myself and everyone else. But guess what? Sunday’s my favorite day again. I think of what everyone did for me, and I feel like a very lucky guy. — The Silver Linings Playbook

Sam and I were invited to the wedding of some old friends last weekend. The couple had postponed their celebration because of the pandemic, but like most of us looking for a little bit of normal, they, too, saw the covid vaccine as a way through to their special day. We said yes to some beautiful normal that day, although we still weren’t quite feeling fully normal. We masked up for the ceremony and stayed out on the patio for the fun. It was the best day. 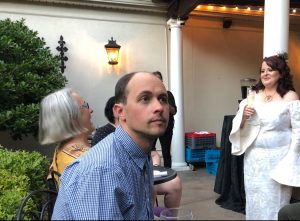 Sam hasn’t been able to go dancing–one of his favorite things–much at all for the past year and half. He joined an Eastern swing dance club several years ago, but they closed with the first covid lockdown last year and opened for a club dance only once, as far as Sam can tell, just before the surge of the delta variant put a damper on everything again. I think the only time he’s been out is when his aunties took him dancing on a mountain biking trip in June. (Remember June, when we thought we were finally free of it?)

On the way to the wedding, I told him there would be a DJ and music and a chance to dance. He said he wasn’t sure about staying at the party that long, let alone dancing. “It’s risky, Mom,” he said.

But, as you can see in the photo above, his eyes were soon on the dance floor. He waited for a bit, hoping a the DJ would spin a good swing dance number, but after a few tunes, he decided he would just make his move. He danced quite a bit, including at least one number with the bride. He’s a lucky guy that way.