Saturday we took care of errands ending up at the grocery store just before lunchtime. About halfway through our trip, we saw an assistant manager leading three new trainees around the store, pointing out the location of various items.

Sam stopped and watched for a second. Then he announced that three days before was the ninth anniversary of his date of hire.

The good people at Albertsons hired him as a courtesy clerk the summer after he graduated high school. He had help from a job coach, hired by the state, to make sure he got off to a good start. 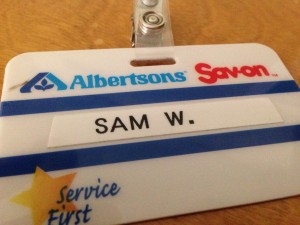 His favorite part of the job is retrieving carts. If you catch him heading out the door to fetch carts, you will see him ride a cart like a skateboard to the far side of the parking lot. He tells me it’s a move he invented.

Sometimes, he says, the managers tell him there’s enough carts for now, and he needs to come back inside to help sack groceries.

He’s a good sacker, but he he thinks that the speedy sacking champions who used to make an appearance on The Late Show with David Letterman are just crazy.

Although I don’t have it on any authority at all, the store seemed too quiet after Wal-Mart opened at Rayzor Ranch. But recently, it’s been busy no matter what day or time I visit the store. I don’t know the reason, although I have my theories. People are struggling with the construction on University Drive. And more than once I’ve heard someone say they are tired of the crazy parking in the lot outside Kroger.

Who knows how much longer he’ll be there. He just headed out the door right now to walk to work. He’s a cheerful, reliable employee. When we were shopping yesterday, everyone, including the store manager, stopped to say hello.

As wonderful as working at Albertsons has been, and will likely continue to be, Sam should be celebrating his second or third anniversary in the tech sector. That’s what his degree is in. That’s where his talents are. That’s what the contract says with his new job coach.

The IT sector is desperate for employees. Sam’s brother, Michael, didn’t major in IT, and yet that is where he landed. It’s hard not to feel irony’s burn. We worked so hard to get to this point. Sam’s ready for the world. But the world isn’t ready for him at all.

Posted in adults with autism, rants