Earlier this fall, I was able to spend some time with a local biologist studying quail. I learned more in the course of that day than I was able to put in my newspaper story, which often happens.

The biologist has been working with area ranchers on ways to keep the prairie vital both for their cattle and the quail. On the drive back from Clay County, I saw all the ranches in new ways. Some looked like the ranch we had just visited, lush and vibrant. Others looked used up. I smiled to myself about our farm. When we sold it, our place looked like the former, not the latter.

The biologist started telling me a story about how he’d approached one rancher to bring his land into the quail “corridor.” The rancher agreed, but on one condition: it couldn’t cost him any money.

I could tell the biologist planned on telling me this story a certain way. After all, he was trying to build a big research program and do this good thing for the environment. He needed money for his labs and the students helping with the research. They were bringing new and important scientific knowledge where it was badly needed. The reality likely was this: a rancher that needs to make a change after doing things a certain way for years and years probably needs to spend a little money to get it back right.

Before the biologist got to the big finish in his story about the rancher, I blurted out, “so, really, he asked that whatever you proposed for his ranch be truly sustainable. Because for the changes to last, they can’t keep costing him money, right?”

(This is why people don’t invite me to dinner parties. I’m impertinent. I ask questions that stop the conversation.)

The biologist finished his story, telling me that it took awhile to make the changes to help the quail and figure out the true costs, but ultimately, the rancher didn’t lose any money running his cattle that year. The biologist had delighted in the discovery. But, I could tell by the many long and thoughtful pauses that came after I asked my question that he hadn’t thought about the sustainability of his quail program that way.

We didn’t farm our place with some lofty, progressive, green ideal of it being “sustainable.” We just knew we didn’t have any money and that anything we did needed to be harnessing and directing the little energy we, or the land, already had. 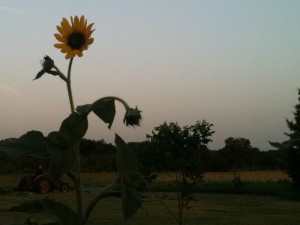 Late summer on the farm

When we tried to help Sam learn to talk and become the marvelous person he was to become, we tried not to focus on hoarding resources. We just tried to harness and better direct the energy we, and he, already had. It worked pretty well.

Sustainability. Its a powerful word. We are starting to use it a lot. I’m not going to let it lose its meaning for me.