I have a Blue Lacy dog named Gus: 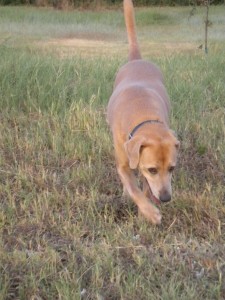 He will be 12 years old this year. Over the years, he has learned many words and phrases. He understands basic commands such as come, sit, stay, and down, of course. But let’s explore some of the more interesting words Gus knows.

Uh-oh. Gus knows when this is uttered in the kitchen to come a-running because something delicious just fell on the floor. Say it in another room and he ignores you.

Time for toothbrush. He follows you to the pantry for those chews that ostensibly clean his teeth.

Squirrel. Nothing more needs to be said.

Crow. Like squirrel, little more needs to be said, but he looks up in the sky.

Time for work. He barks at you until get your boots on. Same goes for, let’s get the paper, or walk, or outside, or take the trash up.

Tractor. Sam never says a word, but Gus knows when he puts in the ear protectors, it’s time to bark because the 2N is heading out into the orchard.

Get ’em up. This was very useful when we had more livestock here, for example, when Michael’s cashmere goats would get out of their pen or the chickens needed to be hustled back in the coop. In 2005, I thought about dispatching him to the Texas Legislature when they made one of many messes they’ve made with school financing at the same time they declared his breed the official state dog.

Given what’s going on in Austin this week, I may yet send him down there.