We are socked in after a bad ice storm because the one thing you can usually count on about Texas weather — it’s changeability — isn’t happening. We’ve been below freezing for about 50 hours and we still have about 20 hours to go. And that non-frozen window is only supposed to last a few hours tomorrow afternoon. 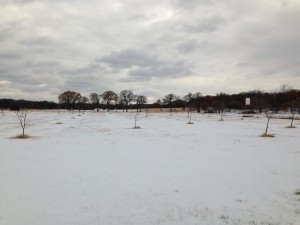 Time to get out great-grandma’s chicken and dumplings recipe. Seventy years later, the notepaper she used to write it down for Aunt Regina is just about as interesting. I’m going to have to consult other recipes on making chicken and dumplings. I’m finding I’m having to do this with some of the recipes Regina kept. During our last visit, Regina, Patti, and I were talking about the skeletal information she had on her recipes and she admitted, “Yes, we wrote them out for people who already know how to cook.”

(I started the fruitcake last weekend. It’s like an Irish soda bread or other boiled fruit cake. The cloves and cinnamon smell so good, as does that brandy.) 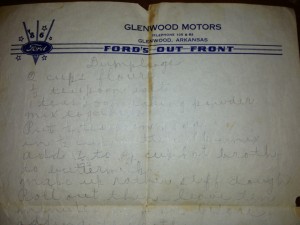 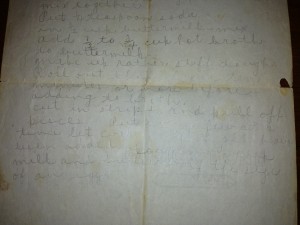 Update: Here’s a complete recipe. The kids give it two spoons up.

½ teaspoon each salt and pepper

In Dutch oven, melt butter and oil. Brown chicken on both sides and set aside. (may need to do this in two batches)

Saute diced onion, carrots, and celery in the oil, butter and chicken bits for several minutes. Add thyme and turmeric and stir a few seconds until it becomes fragrant. Pour in chicken broth and apple cider. Mix well and then gently return chicken pieces to the broth. Cover and simmer 20-30 minutes.

Combine flour, salt and baking powder in bowl. Stir baking soda into buttermilk. Add ½ cup to ¾ hot broth to buttermilk. Stir into dry ingredients and make a rather stiff dough. Roll out thin and leave 10 minutes to rest. Cut in strips and peel off pieces, putting a few at a time in the hot broth until all are added.

Finish the broth with milk and butter.