Yesterday Michael drove us to East Texas to visit Aunt Regina. After years of driving the kids to all their extra-curriculars and these past few years of going solo on so many things, it’s really nice to sit back in a comfy, air-conditioned seat, doze off from time to time, and let someone else deal with the traffic.

That was the case last month, too, when two of my sisters took turns at the wheel of the rental car as we visited the Florida Keys for almost a week. Although, with that being on my bucket list and all, I didn’t do any dozing off. 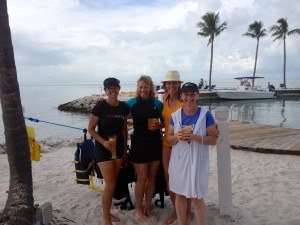 During the drive home from East Texas, I remembered how hard Mark and I worked to keep the kids entertained on long trips. We were always far from family, whether in New York, California or Texas, and rarely had enough money to fly. As a young boy, too, Sam was a terrible traveler. In the early years, we didn’t even try. We’d load the kids up dressed in their pajamas at about 8 p.m. and drive all night, taking turns in 3-hour shifts at the wheel.

That was exhausting. Mark often did the lion’s share. I figure that’s how he knew he could spend his summers driving long-haul truck routes. To recover, he often spent the next day (as in the first day of that family vacation) sleeping.

When the kids got a little older, we brought movies along. We bought a little tv with the video player built in and used a DC adapter to run it off the cigarette lighter.

The kids didn’t want to watch movies all the time. They liked playing old-school car games, too. The alphabet game, the license plate game, travel bingo, Mad Libs.  One year, I made a copy of a Texas road map and taped it to the ceiling of the van so they could follow the route along and check off towns as we passed them.

The kids would see more towns than were on the map, so they made their own checklists one year, too.

There are a lot of towns in the Texas Panhandle.

I never thought about it as any more than trying to help them be comfortable and save Mark and me a few gray hairs from the trips. Our road trips were pleasant enough for as long as they were.

Yesterday, though, I came to understand that those long rides and little games taught the kids a valuable lesson about confronting boredom in meaningful ways, and about being observant.

Probably something to keep in mind before you ply your kids with electronics. That is, unless you can find e-versions of those games that make them look out the window and work together from time to time.