Saturday was my second time to attend a Texas Christian University home game. They are a spectacle. There is the official horned frog mascot and then there are Michael’s friends, who dress in morph suits to look like a Blue Man group guy that drank too much grape juice and Penguin Referee if he wasn’t wearing a top hat. We had to stop at Michael’s apartment to swap out Sam’s shirt. He left the house in CSU green instead of purple revolution.

I believe that in this photo I am the one to look the most like an eggplant. 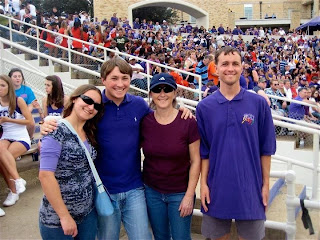 The smell of beer is overpowering and even though a person is probably safe, I wear my steel-toed boots for good measure.

The first time I got bowled over by the sheer spectacle of football in Texas was when Mark and I went to Paige’s first game as a member of the color guard in the marching band.

We left after halftime. We were really uncomfortable with the amount of community resources going into those games.

Sam loves going to games. It’s a great place to catch up with friends.

At TCU, fighter jets fly over, and jumbo TVs get people to kiss each other on Kiss Cam, and people get awards in the end zone during time outs.

The game was pretty flat during the first half and only got interesting in the third quarter, when Tank Carder intercepted and ran like hell, looking behind him almost the whole 70-ish yards, for a touchdown.

But the distractions — so many of them deliberate — were too numerous to count.

I was in the marching band in college. We helped create distractions. We used to mess up the cheerleaders by inserting multi-meter fills in between chants of “Get that ball!”

On the way home, I told the kids I felt like I always do at games, like an outsider. Sam piped up right away, clearly feeling authoritative on the matter.

“Just about everywhere you go, you’re an outsider,” he said.

Posted in What Sam says