Peggy: The grass is wet and it smells so good out here. It must have been a nice rain.
Sam: Kind of. The sun was shining the whole time.

In my faith, if you have a need, we’ve got a saint for that. I’ve got one of those little “guardian angels” hanging from the rear view of the pick-up, but I don’t take much stock in it. Some would say I need a St. Christopher medal, but I got Sam and myself a membership in AAA instead.

If you’ve lost someone close to you, like we have in the Wolfe house, then you probably carry that person with you like a patron saint from time to time.

The year after Mark died, in my own year of magical thinking, I often talked to birds that came close, in case it was him.

Friends would tell me that they would get visits from their loved one. These were the greatest stories, by the way, friends who could see the loved one in a bedroom mirror after dark, or who would see the loved one next to the bed, and carry on a conversation. I was a little jealous. The birds never talked back to me. Once I thought Mark was trying to visit — coming down the hall after all the kids had fallen asleep — but I got so terribly frightened that he never tried again.

Michael called when I got home from Iowa. He was filled with emotion. He had felt Mark’s presence all through the end of high school and through the first years of college. But now, as he is about to start his senior year, Mark has left his side, Michael says.

“He was trying to get me to be the man he wanted me to be,” Michael said.

Michael realized the message: he was there, the rest was up to him, it was his life to lead now.

Mark’s been gone for nearly five years and he still makes me weak in the knees.

Peggy: So, how was REACH today?
Sam: Good!
Peggy: Did you learn anything new?
Sam: Driving is a privilege.

Posted in driving, What Sam says
Leave a comment

Michael has moved into his apartment at TCU and Paige is packing. Tomorrow Paige and I hop in the pick-up and drive her back to Iowa for her sophomore year.

I tried not to cry when she started kindergarten. She’s my youngest. For years she had watched her older brothers go off to school. Even though she went to nursery school three mornings a week, she was so ready that day she went to kindergarten. She just bounded out of the car like her brothers and headed confidently to her classroom. She was big. How could I cry?

Sunday morning, we’ll move her into a new room, although in the same dormitory as last year. She’s out of her living-learning community, but the bonds between her and fellow writers from last year are strong. They are already trying to figure out how they can find a house to share by next year.

She may not even come home next summer. I’m mindful of that. I didn’t come home after my freshman year. We’re starting to collect things she will need to live in her first home away from home.

How can I cry?

Michael (sharing all the news with the grandparents, via Skype): Sam’s going bald.
Sam: Yes, Mom, it’s wise that you named me after Grandpa.
Peggy: [face palm]

Paige (shouting across the garden): Were you calling for me? I’m sorry. I had my headphones on.
Peggy: No. (pauses) I was sawing, though.
Paige: Yeah. Same sound.

My friend, RunnerSusan, brought me sweet corn all the way from Indiana and that got me hankering for Yankee summer food.

You know, up north, where summer is this quiet, balmy time that you can linger outside all day under a tree and hold a grass blade between your thumbs and call to the birds — not spend a month hiding in dark room with the air conditioning running while Ercot pumps so much juice through the grid that it sparks down the line and sets whole counties on fire.

Here’s a recipe that accompanied a story I wrote about berry picking for Texas Highways magazine that ran May 2007. The editors asked for it, and despite my admonitions that while I liked food, and cooked food, and grew food, I was not a food writer.

They pushed me just a little beyond my comfort zone by insisting the story just wouldn’t work without some kind of berry recipe. So I dug this little gem out of my recipe box — where all the family heirloom recipes have been stashed, except I remember my mother trying this one for the first time when I was a teenager. (Click to enlarge) 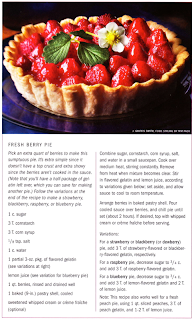 It’ll become an heirloom when my kids make it.

Peggy: What is with all these crazy girls?
Michael: They’re not all crazy. But the ones that are are all kinds of crazy.

Paige: So am I making dinner tonight?
Peggy: Oh, could you? That would be great.
Sam: I know what that means ….
Peggy: Yep, Korean food!