Some dreams aren’t nightmares, but they leave you feeling unsettled in the morning. For me, the best remedy is to get them out of my head and move on. Recently, we discovered that works for Sam, too. 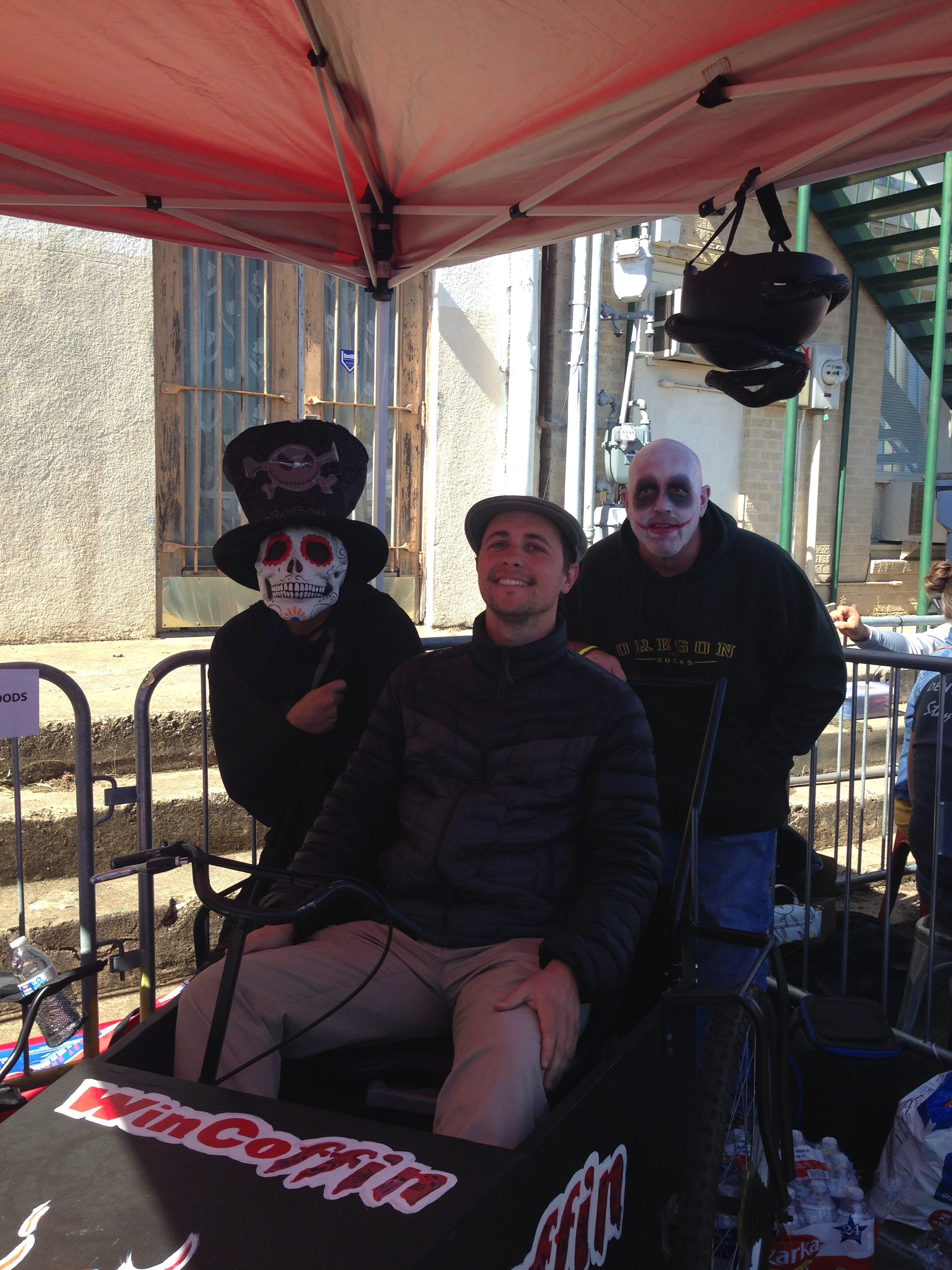 Sam steps into the coffin that his supervisors would later race during Denton’s Day of the Dead festival.

Sam rarely talks about his dreams, unless they are nightmares. But he struggled and complained about that “morning funk” this fall, so a few weeks back, I asked him if he’d had a bad dream and what it was about.

He said it wasn’t really a bad dream, but he didn’t like it. He dreamt he was driving and that, in his dream, when it came time to stop, he somehow wasn’t able to move his foot from the gas pedal to the brake. He worried it could happen in real life.

I didn’t want to tell him it would never happen, because it’s important to tell the people you love the truth. And the truth is, just before a wreck, you are keenly aware how fast things are happening in front of you and how your car isn’t doing what you wish it would.

So I told him I had my own version of that dream, a recurring one. In my dream I am riding in the back seat of a car, careening somewhere fast, when I look up and realize that no one is driving. From the back seat, I struggle first to get my hands on the steering wheel, and then try to get up front to get to the pedals, but I never seem to make it.

Sam laughed and said my dream was really funny. I told him that the reason my dream was funny was because it was both relatable and ridiculous. I asked him if it made him think about his dream differently, and he said, yes, it made his dream kind of funny, too.

Then I asked whether he thought the dreams could be a metaphor for something.

And this is where I am so very, very grateful for Sally Fogarty and the other teachers who were on Sam’s special education team when he was in middle and high school. Sally announced at one of the annual planning meetings that Sam’s speech had come along enough that he would pass the usual tests meant to detect deficiencies. But, she added, we all knew that Sam’s language skills still needed work. She suggested that she administer another diagnostic test and develop a plan that would help him with more abstract language skills–analogies,  idioms, metaphors and the like.

A few years later, Sam and I happened to be driving into Fort Worth and a billboard in Spanish caught our eyes. I read the billboard and understood the words, but I didn’t understand what the billboard was saying. I asked Sam, who was also studying Spanish, if he understood the billboard, because I couldn’t. And he said, “Well, that’s because it’s an idiom.” And then he told me what it meant. That was 15 years ago, and it still makes me tear up.

Sam agreed dream driving could just be the general way we feel about how our life is going, and maybe we don’t need to worry that we can’t always steer, and honestly, we don’t want to stop.