When I visited my parents last week, my mom brought out a pile of childhood arts and letters she set aside as keepsakes over the years. The basement had flooded in a bad hailstorm and the construction paper and mimeographs and report-cards-on-cardstock of my sisters and mine were threatened by the damp air.

She encouraged us to take our pieces back home. I found some watercolors I did as a teenager that weren’t half bad. We stumbled on several long lost family photos. Mom and Dad got to re-read heartfelt Mother’s Day and Father’s Day wishes. But the most fun came after we unearthed two letters my younger sisters, Chris and Karen, mailed home from Girl Scout camp one miserable Wisconsin summer. 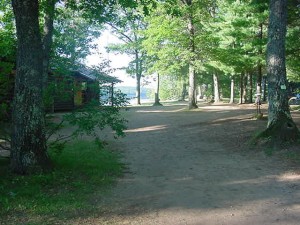 Michael reveled in backcountry trips he took around the Texas Hill Country with Mr. Joe and the rest of the Georgetown Parks and Rec team. Paige’s complaints the year she joined them on a kayak and camping trip to Big Bend pale in comparison to those my younger sisters made of Chalk Hills Camp in Wausaukee. Both Michael and Paige later worked as camp counselors themselves at Balcones Springs.

The next time the kids start telling stories about their “character-building” childhood experiences and Mark’s and my role in deciding that they had to walk to school in the snow, uphill, both ways — well, I’m ready with these little classics.

Mom doesn’t remember her reaction to getting them. “I think they were coming home pretty soon after that,” she mused.

Everyone is pretty homesick here. Karen has been crying a lot. She hasn’t been feeling too well. The bug has been flying around; it got into our tent last night.

Monday night everyone in our tent was crying of homesickness and mostly of the “friendly” counselors. Ha! The only one I like best is Baters.

Monday for lunch our patrol, Baters “Twick suel Jayujayleys” went on a bike hike to the dam and had lunch there and swam for about 10 minutes. There, I got a picture of a chipmunk eating some of our bread we gave it. I was about 2 ft away from it.

I finally found out my part in the play of Mary Poppins. I’m Michael but I don’t want to be in a musical where the parts are favored. They tell us to be fair!

Just as I was writing this letter, yours & Peg’s letter came in.

Karen Hart got stung by a bee.

Today, Karen’s unit (or patrol) is going on an overnight. I made a nature stationery, so the next time I write, I’ll use it.

A guy is here with his cameras. He’s going to [take] pictures all afternoon.

Sue has got a letter for Peg you can send up to her. I don’t know the address.

The weather cooled off, rain, too.

P.S. Can you write separate letters for Karen cause we don’t see each other often. Thanks.

For today, it’s been good except my shoulder and my ears hurt when I talk.

We went for a swim and they put you back 2 or 3 steps. Liz is going in junior life saving and [they] put her in advanced beginners.

The food is good except the cornbread is rotten. Later, after rest hour, we’re going swimming and canoeing. We won a cleanest cabin award for the cleanest cabin.

If you want, you can send me more fungus stuff. The medicine says to apply four times daily. If Dad could write it out, it [would] be good. If you want me to, I’ll send along the medicine. I think I have fungus on my neck and I have it all over my face.

We went canoeing and the swimming alarm went. Someone just didn’t turn in their tag.

It rained yesterday while dinner but after dinner it didn’t rain. In our cabin, we have Tricia, Susan, Laura, Connie, Judy, Elizabeth, Karen. We sleep good except Cabin 2 is our alarm clock. They wake you up at 6:50. You don’t even need to wake up until 7:30 when the bell rings.

There is nothing real fun up here. You just go swimming and go to the arts and crafts center. Once we got to go boating in Michigan and the lost swimmer alarm went off. It was our leader’s tag that somebody else turned.

We had patrol and I’m patrol leader. I don’t want to be it, though. I’d rather be home than up here because it’s so boring.

I don’t ache much anymore except my toe. I smashed it going over the troll’s bridge when we were playing a game when somebody was leading us all around Chalk Hills camp.

The only time I get homesick is when you write letters or I write letters. I guess Peg is coming to camp tomorrow.

Here is a little more information about Chalk Hills, which was founded in 1939 and closed after the summer of 2001. Apparently other scouts have much fonder memories of camp than my sisters do.