For the first time in three years (thanks, pandemic), equestrians gathered for the statewide Special Olympics in Bryan last weekend. Sometimes, it felt like we hadn’t missed a beat (showmanship classes rolled like clockwork Sunday morning even though we were tired from the dance the night before) and other times, the grief over the lost time hit hard (hello, friend I haven’t hugged in five years).

I have to tip my hat at the organizers that recognized the athletes would benefit from an icebreaker after all these years. They outfitted each athlete with four of the same pins for their region. They had to meet riders from all the other regions in order to exchange pins and collect a full set: North, South, East, West. 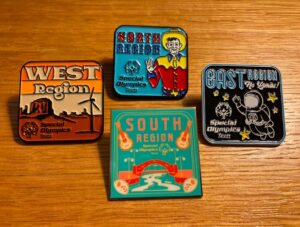 It was fun to watch Sam and all the other athletes not only reach out to one another, but help one another complete their sets. God bless those who came all the way from out west to Bryan, which is in south central Texas.

Sam competed in five events in all. Many athletes in his classes are like Sam and have been riding for years. They are skilled and consistent riders. Some have their own horses. Some compete in able-bodied shows. Every once in while, though, it’s just Zen and the Art of Horsemanship and as it unfolds in front of you, it’s pure joy. I’ve posted video from all five of his events, but it was Working Trail where I wondered whether the roof would open and sun rays would shine down on Sam and Madrid, like in the movies. It was magical.

There are two moments you’ll want to savor. First, when Sam and Madrid are at the gate and you can see he knows how tell Madrid to sidle in closer so that he can easily remove and re-attach the rope. Then, the judge stands up, says “wow” and comes over to shake Sam’s hand.

A photo from the awards ceremony, courtesy of Yolanda Taylor, parent of one of the other athletes in this event: 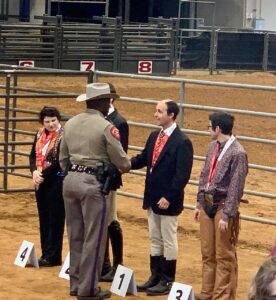 A state trooper and volunteer with Law Enforcement Torch Run shakes Sam’s hand after he wins gold in working trail.

Posted in adults with autism, getting back on the horse, social life