Save the warnings by the National Weather Service, our household would not have been prepared for the freezing weather and massive power and water losses Texas suffered last week. From late Sunday night through Thursday afternoon, we endured rolling blackouts as two separate winter storms came through North Texas. Unlike many Texans, we didn’t lose our household plumbing in the cold, but our city’s system lost water pressure and we were without safe drinking water from Wednesday afternoon through Saturday morning. We also had no home internet service for most of the week.

As the meteorologists gave their forecasts, the conditions looked to me much worse than they did in 2011, the last time we had a day of rolling blackouts. Since that debacle, I’d read Ted Koppel’s book “Lights Out,” a sobering assessment of life after a catastrophic grid failure. Sam has friends who eventually gave up on living in Puerto Rico post-Maria. I recognized the incredible risk embedded in that forecast. We prepared like a hurricane was coming, with extra food, water (including filling the bathtub), and other provisions. We sheltered our plumbing as best we could.

If we had been waiting for cues from state or local public officials, we would not have prepared.

Once the crisis began, it was hard to explain to Sam what was happening. We had little official information to go on. For example, I couldn’t tell him when we might be able to depend on having power again, because no one was saying. I showed him the homepage for the state’s power grid, which has a good visual for what’s happening at the moment. On the outage days, there were bizarre spikes in future capacity, as if ERCOT expected four or five generation facilities to come back online at any moment.

Of course that wasn’t what happened. During the second day of rolling blackouts, we would get a phone call once or twice a day from the city utility, telling us to expect rolling blackouts for the day or night. But those calls said nothing about the grid status or when power would return. 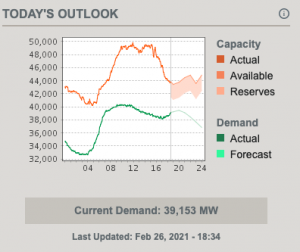 After meteorologists called for warming on Saturday, we made contingency plans to get through to that day. I warned Sam that the power might be unreliable for days or weeks afterward. Power companies had rotated the power off in some places and couldn’t rotate it back on. That could mean the grid is  damaged in places, I told him.

Also, when the blackouts started, I couldn’t tell him when the power would be on or off. There was no discernible pattern and we weren’t told. After about 24 hours, the city’s robocalls suggested a basic pattern, although we predicted it more closely using our oven clock as a reverse timer. We also observed street lighting changes as a predictor when we’d be shut off. If it was particularly quiet, Sam could hear the power coming back before the lights went back on. As a result, we could plan for things we needed to do to survive, like prepare food or charge our phones.

But that adaptive mode was ours to determine, and sometimes I had to coach Sam through it. Nothing was ever suggested to us by a public official how to cope with rolling outages, or how cold your home could get before it became too dangerous to sleep there, and the like.

Sam does well with most of what adult life throws at him, but one of the few things he still struggles with is “official” communication.

Frankly, we all do better when public officials communicate with us in plain language. That is one reason why the federal government adopted the Plain Writing Act of 2010. I recognize the writing style when I get a letter from the IRS or the Social Security office. They always write in plain language so that even when your situation or the law around it is complicated, they use vocabulary and syntax you can understand so you can act accordingly.

For people with autism, such plain language communication is vital. Sam would likely have suffered greatly in last week’s outage without someone with him to translate what little information we were getting and work to fill in all the voids. ERCOT wrote arcane tweets about load-shedding, for example, and asked people not to run their washing machines. Still shaking my head about that.

We’re both still recovering from the trauma of last week. The trauma was made far, far worse by the lack of communication from state officials. As they set up their circular firing squads in Austin this week, we are learning that they knew this problem was coming and they knew it was a problem of their making. I’m sure individuals were panicking and that made it difficult to make good choices, but that’s why, in calmer moments, they are supposed to write and practice emergency plans. This was foreseeable and preventable. However, in my darkest moments, I sense that the lack of communication was a choice, one they made in part to avoid blame.

This week, I’ve also been stunned by how many people stung by this abject failure expect it to happen again. They simply do not expect our state to be able to fix this mess.

I want to reject that premise, but, mercy me, if it happens again, can they at least have the decency to communicate to us, and in Plain Language?