Sam limited his food choices when he was in elementary and middle school. Sometimes we took action, but otherwise we tried to keep a good humor about it.

I can remember taking the kids out for breakfast, usually when we were on the road, and as the rest of us were all scarfing down pancakes and eggs and grits and bacon and sausage, Sam would be opening a fun pack of cereal and spreading jam on an order of dry toast.

He expanded his food universe by trying all different kinds of jam. He settled into a routine where he would spread each piece of toast with all the jams at the table equally. Sometimes that could be four or five different flavors. When that happened, he called it rainbow toast.

Some of those pieces of toast became real works of art, kind of like that cool stuff baristas can do designing hearts or flowers or conifer trees in the foamy milk in your coffee.

He doesn’t do that anymore, but he hasn’t lost his appreciation for a good jelly or jam.

For a long time, I just made the classics, like grape and blueberry. Lately, I’ve been trying new combinations, like strawberry-rhubarb with ginger, and apple-tequila. He likes them for the most part. The prickly pear jelly was a bust, as far as he was concerned, and he doesn’t like the butters — so things I can do with figs and pears, he just passes on.

Today, we finished the “sunshine” strawberry jam. I got the recipe from Jamison and Jamison’s “A Real American Breakfast.” This is not a recipe where the list of ingredients tells you much. You have to read what they tell you. It’s an old recipe. I’d been wanting to make it for a very long time, even before I wrote this story.

After the first day in the sun, Sam said, “It smells great.” After the third day, Sam said the flavor was intense.

Yep. Sunshine in a jar. Rainbows on your toast. This recipe is going in the regular rotation. 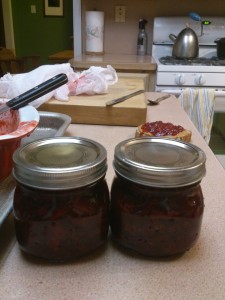 Because Tom Reedy wants the recipe:

Make sure you and your utensils are scrupulously clean. Discard berries that are bruised or otherwise ailing. Stem the berries and halve them, cutting out any cottony white cores. This can easily eliminate 1/2 pound of the berries. Weigh the berries and combine them with 3/4 cup sugar per 1/2 pound of berries. (Really, truly, I say, weigh them with your kitchen scale; no guessing.) Mash lightly with a potato masher or pastry blender until you have a goopy strawberry soup of sorts, a thick liquid with small but distinct berry segments (These segments are rather toothsome when the jam is done, so, I say, think about that when you stop mashing and decide if the bits are small enough for you.)

Pour into a shallow dish (I poured it into two ceramic baking dishes so it was no more than 1-inch deep.) Cover with cheesecloth secured with rubber bands. (This is Texas, cover it with a double layer.) Set out in the sun for the day. Bring back inside and refrigerate overnight and repeat the following day. If you live in a warm, dry, sunny climate, you’ll probably have jam by the end of the second day without doing another thing (The Jamison’s live in N.M., so I’ll bet they do.) In a more humid or cloud-covered setting, it will likely take another full day of sitting out (and overnight refrigeration) to get the proper gelled texture, less thick than commercial versions, but with definite body. It will help speed the evaporation if you stir the jam a time or two during the day. If rain is anticipated, leave the jam in the refrigerator rather than putting it out. (We had rain at the end of the third day, but by then the jam was done. Sam brought it in.)

When the jam is ready, sterilize 2 half-pint (1-cup) canning jars. (I had enough jam to fill two-cup jars, as you can see). Spoon the jam in the jars, leaving about 1/4 inch of headspace and refrigerate for up to several weeks. Freeze for longer storage.