The kids and I sat behind a family with three wiggly boys at Mass this morning. It didn’t take long for Michael, now a coach at Easter Seals, to notice that the youngest one was likely on the spectrum. I noticed, too, and remembered when my children could be that wiggly.

I thought for a moment about tapping the mom on the shoulder and offering her a tip, but then I remembered how I felt about advice from well-meaning strangers and kept my thoughts to myself.

Our church has Mass in the round. The altar is in the center of the room. It provides a good view for everyone, if you’re a grown-up. If you sit in the back, whether at St. Philip’s or at a church with a traditional layout, your kids seen only all the big people around you.  But if you sit in the first row — and you have about six chances with a church in the round — all of the proceedings unfold right in front of you. 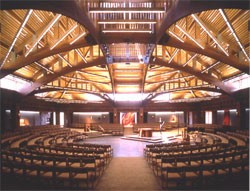 Mark had a bold idea when our church, St. Philip the Apostle in Lewisville, opened its new worship space in 1997. We wouldn’t sit in the back. We would sit right up front. If the kids wiggled, they would wiggle right onto the floor. And, they could see.

The first couple of times were a little scary. But it worked. The kids actually wiggled less because they could see what was going on. And, when they came back from children’s liturgy, they didn’t have to work too hard to remember where Mark and I were sitting because they only needed to scan the front rows.

I can’t remember when we realized the kids were calm enough that we could sit in other spots. But I do remember we started picking spots that would let Sam avoid the incense during the Gospel reading. He would slip out into the narthex and then slip back in at the end of the Homily, when it was done smoking so much. Eventually, we found a spot where the smell wasn’t as strong and we sat there so he could stay all the way through the service.

On the way home, as we shared our observations of the new Family Wiggly, I asked the kids if they could remember sitting in the front row and whether they liked it better. Could they see better? Did they know we did it so they wouldn’t wiggle so much? None of them could remember a bit of it.

Sam did remind us however, that while it may have been years since we’ve sat in a front row, we did for Mark’s funeral Mass.

Amen to that, Sam. Amen.