I doubt my late husband could have convinced me to move from California back to Texas without the miracle of air conditioning. I still marvel at how I lasted the first months of my freshman year at North Texas State University, moving from central Wisconsin into an un-air conditioned room on the fourth floor of Bruce Hall.

(There were showers full-on cold every morning and night, swimming in the pool that used to be across from Willis Library, and everything iced. And more showers. Go, Mean Green.)

I try not to think about those beautiful California delta breezes at 4 o’clock in the afternoon in August in Texas. In Sacramento, the winds shifted just as the summer afternoon got hot. Those delta breezes pulled in air cooled by the Pacific Ocean.

Summer outstays its welcome here in Texas, the way winter does in Wisconsin. Air conditioning makes it bearable. 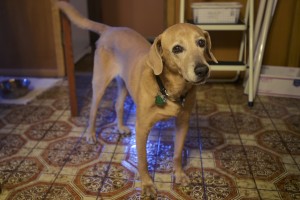 So does splaying out on the kitchen floor tile, as my dog, Gus, would tell you if he could. Photo by David Minton

Gus doesn’t like the air conditioner in our new house one bit. On move-in day April 1 and for a day or so after, he wouldn’t go down the hall towards any of the bedrooms. I didn’t figure out why, and it passed. Only later did I understand that it passed because I turned off the air conditioner until June.

We had an unusually cool, wet spring. I wanted the peace and quiet. My house was built in 1961. Air conditioning for this house, like many homes of this era, came later. That means the system equipment that would be in the attic of a newer home was installed in our hall closet.

After I turned the air conditioner on for the summer, Gus preferred to stay in the living and kitchen areas. When pressed, he would come into the first bedroom, which is my office, and hid under the desk while I worked.

Gus is an old guy. Come November, he’ll be 14, which makes him about 78 in dog years. After we sold the farm and moved to town, it was fun to watch him recognize that his patrol duties had shrunk to a city lot down from 10 acres (with the additional security risk of a creek running through part of it).

You could almost see it in his eyes. “Hey! This is great! I can retire!”

We have a new routine that includes lots of fake patrols through the drainage ditch behind the house. Instead of napping under the porch, he naps in the garage.

At night, he’d whimper and cry when I headed for bed, which soon became crying whenever I went down the hall. Still, it took me a few days to figure out it was the air conditioner that was bothering him.  At first, to help him out, I carried him down the hall, past the unit, at bedtime. But then, he started getting anxious as I would get ready for bed. Clearly, he didn’t even want to be carried down the hall. I looked again and saw that there are intake vents both in the hall and in the master bedroom.

I set up the laptop in the kitchen. I hardly use the big Mac the way I used to for writing and research. I moved the sewing machine to the dining room. And every night since June, I throw the big decorator pillows on the floor for Gus, and I sleep on the sofa.

When Sam went to kindergarten at Argyle Elementary School, he was terrified of the school bells. The teachers worked it out that Sam would always be outside for a fire drill before the alarm went off. But the 9 a.m. attendance bell was becoming a problem. The kindergarten teacher told Principal Gaye Pittman that Sam would watch the clock earlier and earlier each day. He was developing an increasingly elaborate routine to try and anticipate the moment the bell would sound.

Gaye knew just what to do. She turned the bells off. Teachers would just have to remember to take attendance at 9 o’clock without a bell.

We’re not turning it off.