Early on during our bicycle trip in southern Italy, Sam announced a goal: he was going to try all the seafood he could. That was daring.

The first day, our trip leaders asked whether anyone in the group had food allergies or preferences that they needed to know. Sam’s preferences are idiosyncratic, but they aren’t hard to work around. It was easy enough to tell them that for welcome cocktails, “no alcohol, no bubbles” works for Sam. The bartenders seemed to enjoy the challenge putting together fun juice combinations for Sam. He also doesn’t like fresh tomatoes, although tomatoes cooked into sauces are ok. Even so, when something came out of the kitchen with a tomato or two – the Puglia region is famous for its cherry tomatoes – he was a sport about it.

But the seafood goal was something else altogether. The first time I can recall him being deliberately additive, not restrictive, about food. He studied entire menus in his quest. He picked classic Italian dishes: a plate of mussels as a starter, pasta with clam sauce for a first course, a swordfish steak for second. He picked unexpected ones, too, like seafood pizza. He was triumphant when he found octopus and potatoes for dinner at a seaside restaurant in Savalletri. 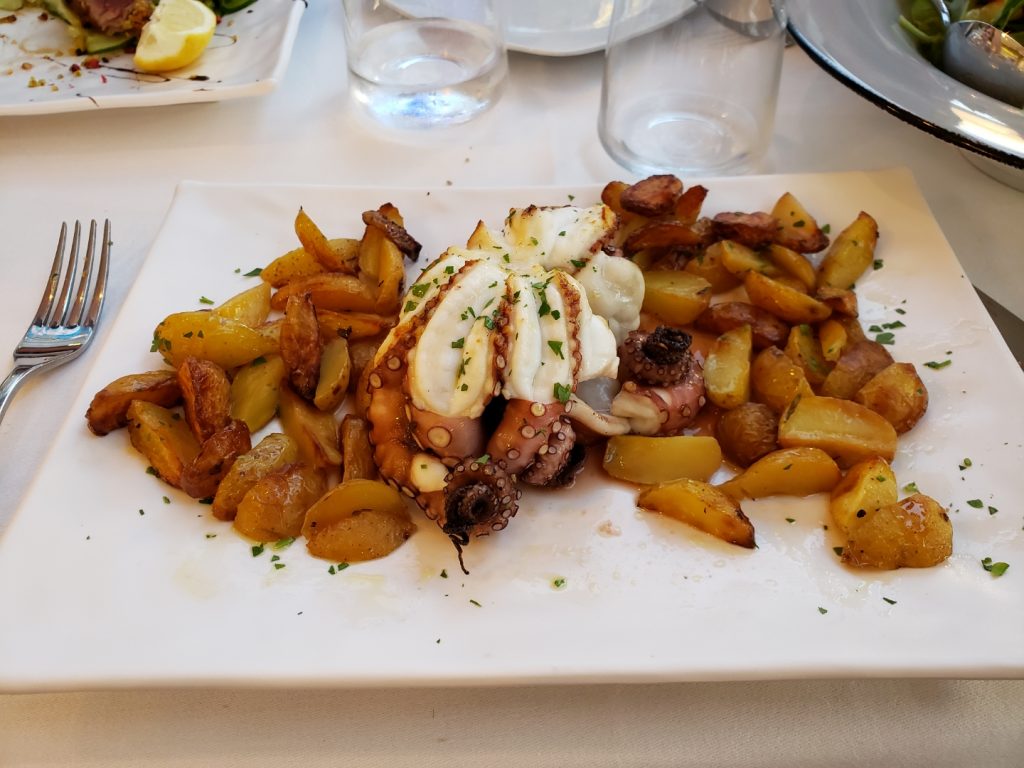 That’s his photo, by the way.

It’s hard not to be sentimental about how far he’s come. Sam was so food challenged growing up. As a preschooler, he would eat only breakfast cereal morning, noon and night. He hit his big growth spurt at age 15 and even though he was hungry, he limited his food choices and still refused meat. We came close to taking a second mortgage out on the house in order to pay for an intensive intervention program at Ohio State, but he turned a corner just in time. Given enough ketchup and Parmesan cheese, he started broadening his choices. Instead of eating the edge of the bun all around the hamburger, he ate the whole burger.

(Puglia restaurants are surely restocking their Parmesan supply now that we’re back home. But to be fair, he didn’t cover everything in Parmesan. We let him know which Italian foods didn’t lend themselves to that and he was happy to try without.)

Paige and I had our own dining wish lists, although we were never able to make good on eating tiramisu in Italy. The dessert at the end of the meal was usually the chef’s choice. Sweet semifreddi, gorgeous gelatins, mille-feuille — it was hard to get upset about that.

We didn’t expect that the choice of dessert sweets would be plentiful at breakfast, but there you have it. Italian masserias place many different cakes and crostada on their breakfast buffets.