I’m glad we decided to etch the kids’ heights in the side of an old bookshelf from Pier I instead of on the pantry wall or some other doorway in the house. 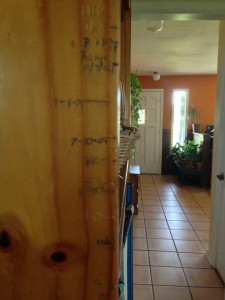 When we built our little house on the Texas prairie nearly 20 years ago, this was supposed to be the last home we’d ever own. We cleared the land and planted 10 acres of pecans. We planted fruit trees and asparagus and berry beds. We started capturing the rainwater and saving it for irrigation on dry August days.

We planned the farm as a backup plan for Sam in adulthood. We were inspired in part by a kibbutz-like farm in Ohio that was a group home for adults with autism. If Sam had nothing else, he’d have the farm. We gave a lot of thought to how we would manage it as we aged, too.

When Mark died, I didn’t see the need to change the plans. The kids were still like fledglings then. Sam didn’t even have his driver’s license. Soon enough, I saw that all the plans Mark and I made only got us to the launching pad. The kids dreams are their own dreams.

In the end, they don’t care if the house they grew up in is the house I stay in. So, I’m not going to.

I’m not quite sure what comes next, but it starts with packing, and donating, and finding better homes for things, and throwing things away.

That wobbly old pine wood bookcase from Pier 1 has really yellowed, but I’m going to keep it. It’ll have a place of honor in my next kitchen, holding all the cookbooks, wherever that may be. 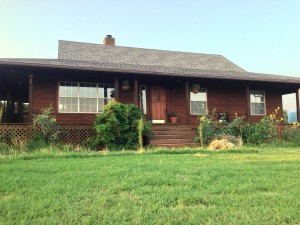 Posted in decision-making, getting back on the horse