When I stop to think how far Sam has come, not just since he was a child, but even his first few semesters of college, I am awed. During these past 10 years of adult life, he’s met tough challenges head on and showed that he can think on his feet. He does so well that I sometimes forget the creative problem-solving skills that flow so easily through the rest of the family aren’t really at his command.

Sam really likes raspberries. Sam is also the family scone and kolache baker. We tried to adapt a peach scone recipe from one of our favorite baking cookbooks, The Pastry Queen. The raspberry scones were a mess. (But we still ate them.)

I had a flash. There was another recipe in the King Arthur Whole Grain Baking cookbook that had a cinnamon-stuffed scone. I told Sam we could mash the two recipes together to help our idea turn out.

It worked, but I made the mistake of not communicating out loud and in advance which steps would come from which recipe. Sam retreated to the laundry room several times during the creation of these beauties to talk himself out of being upset with me (which I appreciate).

I don’t have the explanatory gifts of Julia Child, nor the exacting thoroughness of Coach In the Kitchen.

But as you can see, they turned out great. And Sam is happy to share his recipe. 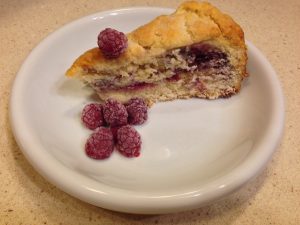 Preheat the oven to 375 degrees. Grease the pan. Stir flour, sugar, powder and salt together. Cut in butter until mixture is crumbly. Fold in buttermilk and stir lightly until it forms a ball. Pat down and fold over once. Divide the ball in half and pat into two discs that fit the pan. Put one dough disc on the bottom, spread with jam and top with berries. Top with the other disc of dough. Cut into 16 wedges. Bake for 40 minutes until knife inserted in center comes out clean. You can brush with milk and sprinkle sugar, if you’d like. Let cool for ten minutes before releasing the side of the pan. Serve warm.