I try to live my life without regrets. Watching Sam get up each day as if it were fresh and new taught me a lot. He gets afraid, just like anyone else, but that iron-grip that messes up so many people, he just can’t do it. It’s inspiring. We don’t hold onto fears until they poison your life, turning grievances into grudges and resentments into rancor and hostility.

These days, however, I’m regretting like crazy the day I got rid of my mountainous piano music collection. I began amassing piano music at age 9 and didn’t stop until I reached my 30s, even though I decided, when I first majored in music, that the piano would no longer be my primary instrument.

It was a sweet collection, full of great editions of Beethoven, Bach and Mozart, Gershwin and Chopin, and scores of composers I’d never heard of until I played a piece I liked and learned to watch for more at the music store.

My old piano — a turn-of-the-century upright grand — had fallen into disrepair 15 years ago. Mark was a DIY-er, and somehow Sam got it in his head that he, too, could fix things. He would fix my piano. He was 10 or 11, and I would come home from work and he would have more pieces on the floor. He had the best of intentions, but I was terrified. He’d gutted about an eighth of it before I finally got him to see that it was too big of a job for him.

I started casting about for someone to do it and I didn’t have to go far. A fellow in Krum rebuilt the old beauties. He had a monster waiting list and it took a long time and a fair bit of cash.

I tried keep the overhaul of my piano in Mark’s and my discussions of what to fix or buy next, but it kept losing out.

I’m afraid I let the darkness get the best of me. I’d already put the euphonium in the case (that was because of TMJ.) I thought my music playing days were over. I boxed up all the piano music and took it to the University of North Texas library. Some of it may be in the stacks, but some of it, I’m sure, was sold or tossed.

After Mark died, the house got too quiet. I would get tears in my eyes when Paige would practice her oboe, knowing that those days were numbered, too.

I got back in touch with Phillip Williams, the piano man in Krum, and got on the list. It took 18 months and turned out amazing. My dad had found it for me when I was 9 or 10, spending a $150 with a used piano dealer in Milwaukee. It had been a pizza parlor piano, painted light blue, and then orange. My mom put a faux wood finish on it, which Phillip said was the best thing she could have done. He stripped the cabinet to reveal a gorgeous oak tortoise shell grain.

And I think all the time about how it was the last piano he overhauled.

Phillip had put off heart surgery for years, but told me his doctor said no more. Phillip would finish my old Hobart before he went into the hospital.

Like Mark, who left the house one day and never came home, so did Phillip. I felt so bad for his young widow — she was younger than me — but I didn’t know her well enough to do anything more than send a card when I learned of his passing.

So I play the piano with what little music that stayed hidden as I was cleaning out, plus a few scores I’ve been able to find online.It’s so different now from when I was young. Back then, playing and practice was all about scales and arpeggios and technique and perfection. Now it’s all about heart.

Phillip told me that before the Great Depression there were more than 400 piano makers in the U.S. After, there were just two. He made a little “Hobart – Made in Chicago” sticker to put above the keys for my piano. It’s not authentic. Heck, he even put it on a little crooked.

But I don’t care.

It was all about the heart. 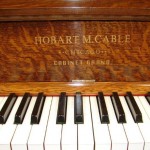 Posted in getting back on the horse