I wish that the amount of awareness and research into autism and the gut was part of our lives when Sam was a baby.

I can’t help but think things would be different. I touched on some of the problems that emerged when he was a toddler in See Sam Run. But there was never, ever any kind of meaningful conversation with his pediatrician until he reached his teens.

By then, Sam’s food preferences could just as easily fall into the category of an eating disorder as be seen for what they likely were — an adaptation to what gave him bellyaches on a scale that I don’t think the rest of us could tolerate.

But Mark and I were ready to take out a second mortgage on the house so that Sam and I could spend the summer at an in-patient treatment program at Ohio State when Sam was 14 or 15 years old. Sam had shot up at that point, but he wasn’t eating meat. He looked every bit as undernourished as he was, especially his skinny little quads and calves. The program helped get kids with autism to expand their eating choices. Another parent on the autism journey whom I really trust had recommended it.

Fortunately for us, the treatment director recommended that we rule out Celiac disease before we got there, since that was something they typically did before they started treatment anyways. Sam couldn’t eat any gluten for a week before the blood draw, and he got really hungry.

He decided he could eat meat after all. He like sausage the best. He also figured out ways to taste and try new things to decide for himself whether he liked them. We decided that was enough of a breakthrough not to hock the house.

Even though they were able to rule out Celiac, the test results hinted at trouble. We talked about it, but there really was nothing more to be done, the doctor said.

When it was time for him to transition from his pediatrician to the family physician, she asked me if I had any concerns for him. Again, I tried to open the door to talk about his digestive troubles. She said she didn’t know anything about it and that was the end of that.

The issue has re-emerged for him and this time we are going after it a lot more informed. When he was a preschooler and would only eat cereal morning, noon and night, we fortified his milk with l. acidolphilus. I’d always made yogurt over the years, although Sam wasn’t always a big fan. We had some inkling of what needed to be done to help his digestive system, but we didn’t know to what degree.

My first hint, honestly, that there was a much, much bigger world of beneficial bacteria out there was when my daughter, Paige, started making us kimchi and told me it was a health food.

So, now we are all about the fermenting here at the Wolfe House. I started with Creole cream cheese. I tried not to channel my home economics teacher as I sat that milk out on the counter for a day and half. But it was wonderful. I made crepes and filled them with the cheese topped them with warm strawberry jam. Sam likes cheesecake so I thought it wouldn’t be too much of a reach, but it was. Oh, well, more for Michael and me.

Plus, I had a whole bunch of the kind of whey the author of Mastering Fermentation likes to use in her recipes. Next up was probiotic ketchup (a hit) and hummus (good, but a miss for Sam.)

When we make our salad dressings now — Sam is a huge salad fan — we use vinegar with the mother. (Just Google it. The point is to eat food that’s alive.)

Judy Thurston over at Hidden Valley Dairy suggested keifer (another hit) and I just ordered supplies I need to make soy sauce and regular cream cheese.

I want to get good at making cheese so that I can make the one he loves: Parmesan. 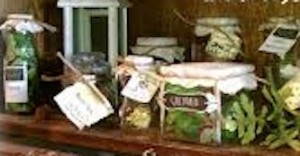 I’m still working on getting supplies for what I’m sure will be a big hit when I get it done: salami.

No kidding, it’s fermented. Is that why sausage was the breakthrough for him 10 years ago?

Well, back to the kitchen. Got more potions work to do.