Elected officials in Texas have refused for years to adequately fund the medical and disability services that allow individuals to live in the community and avoid costly (especially to taxpayers) institutional care. Federal programs can pay the lion’s share of these services, and in most other states they do, but Texas refuses to expand Medicaid enough to allow that to happen. Instead, they authorize puny levels of funding for “waiver” programs—part of the federal law that allows Texas and other states to opt out with the promise to take care of people in their own way. But really what Texas does is pretend the burden doesn’t exist. Instead of fostering human progress, Texas disability policies hardwire families and communities for long-term suffering.

Sam was in kindergarten when we first moved to Texas. We followed the advice of the good people at Denton MHMR and put his name on one of the infamous waiting lists for the state’s waiver programs. Our social worker said that even though we couldn’t be sure then what services Sam might need when he was 18, we’d have no chance at help if he wasn’t on a waiting list. At the time, we were among the young families that got a little help paying for respite care and for special equipment, so we picked the waiting list for the waiver program most like that.

(Sadly, a year or two later, even that modest state program for young families ended. We were on our own.)

Families who are able to access services under these sparsely funded waiver programs understand them much better than I do. Sam made enough progress and adapted well enough that he doesn’t need the help—the kind of basic human need that tends to make allies and advocates into battle-hardened experts in the shortcomings of public policy.

But I do know that the Texas waiting lists for waiver programs are cruelly long. Nationwide, there are about 600,000 people on a waiting list and more than half of them are on a list in Texas. (For context, remember that less than 9 percent of the nation’s population lives in Texas.) 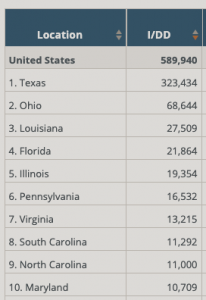 In its latest budget, the Texas Legislature funded additional slots to get more people into the waiver programs, but not nearly enough. Some advocates and self-advocates have done the math: the Texas list is so long that individuals could wait their whole lives and never receive services.

When other states would get in this deep, they agreed to Medicaid expansion made possible by the Affordable Care Act. Waiting lists for waiver programs in those states nearly disappeared because Medicaid expansion stepped in to fund those services.

According to the Kaiser Family Foundation, Texas is among just 12 states that haven’t expanded Medicaid. Texas is, by far, the most populous state to refuse to provide services at a meaningful level and make no real progress toward that goal.

Some advocates wonder whether the U.S. Department of Justice will intervene, especially when U.S. Department of Health and Human Services officials seemed to wobble on approving the state’s waiver program earlier this year. It’s a great question, but we need look no further than the state’s troubled institutions—called state supported living centers—to see how a negotiated settlement might go. Independent federal monitors have visited those centers since 2009, after fresh reports of abuse and neglect emerged with cellphone video of a “fight club” forced on residents at the Corpus Christi center. All 13 centers were supposed to meet negotiated standards by 2014 or face further action, up to and including closure. Twelve years later, none of the centers (home to about 4,000 people with developmental disabilities) met the standards, the monitors still make regular visits, and all 13 centers remain open at increasingly unsustainable costs to state taxpayers.

Texas is growing fast and its people need a far more robust physical and social infrastructure than state officials seem to grasp. Some people see our governor moving about in a wheelchair and think he’s got the disability thing covered. But advocates know better. “He’s not one of us,” I heard one self-advocate say recently, pointing out the many, many differences between an individual who must adapt their entire life when compared to the governor’s experience, where the need for a wheelchair came much later in a life of privilege.

These days, Texans are watching their governor and the other small, little men in state leadership race to the bottom in a panic to maintain power. In that twisted race, their lawmaking and policies are displaying new levels of ignorance and cruelty for all to see. But color me not surprised, as the ignorance and cruelty has been part of their law- and policymaking for our community for a very long time.