Olga Korbut changed the face of gymnastics when I was in junior high school. She looked so graceful and athletic in Seventeen magazine’s photos from her performance at the 1972 Olympics. As you might imagine, many of the wiggly tweens in my gym class were excited that our teacher added a gymnastics unit, largely because of what Korbut had inspired. Now, we could all experiment with moving through the world that way. That’s also when I learned one of the rules of floor exercise: a gymnastics routine can borrow from dance and mix in lots of tumbling, but it must also go to all four corners of the mat. 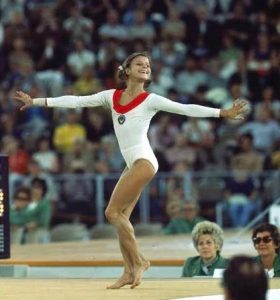 Korbut competes in floor exercise at the 1972 Olympics.

It’s a curious rule, yet wise when you think about it. It requires the competitor to be thorough as they challenge their body. I started thinking about that rule again recently and decided to add it to my ongoing pursuit of small, yet large, New Year’s resolutions. For 2021, I plan to take things to all four corners.

Last year’s resolution, Wear An Apron, feels prescient now, given the pandemic. We certainly spent a lot more time in the kitchen in 2020. But the bigger idea behind it–that whatever problem we faced, someone out there solved it already–kept us grounded, too. Online, we found Khan Academy to help Sam (and me) learn calculus as well as a sewing pattern and instructions for face masks vetted by some pragmatic nurses in Iowa. On YouTube, I started following a smart yoga instructor and my dad’s favorite backyard gardener, a fellow in England whose bona fides begin with his unapologetically dirty hands. Even streaming The Repair Shop revealed wide-ranging wisdom about problems I didn’t even know could be solved. Awesome.

Thinking ahead to this year, I remembered an editor who would remind us reporters to nail down all four corners of an investigative story before publication. Smart advice, but it also created a defensive image in my mind’s eye rather than something inspired by filling up the space of a gymnastics mat. Don’t get me wrong, it’s important to be able to rigorously defend your choices and actions, but the big idea for 2021 shouldn’t be about the pursuit of perfection. Instead, going to all four corners means planning thoroughly, and being careful and deliberate.

Raising kids, especially someone like Sam who needed so much, shunts the pursuit of perfection to the side in favor of steps that move toward progress. But I can’t say we always took it to all four corners.

For example, Sam does pretty well in the kitchen. All my children learned cooking and cleaning basics and food safety. Now, Sam does so well with some recipes that I can plan time off in the kitchen when he steps up. But I know we haven’t taken it to all four corners. Managing a kitchen is hard with all the planning and shopping. And the principles of cooking that let you tackle a new recipe, that’s something else, too.

So, not such a small idea after all. But it may be warranted for 2021, because I bet once we let loose the reins from the pandemic, there could be many things that need to be thought through again, and to all four corners.