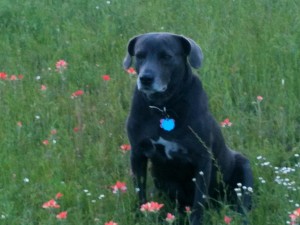 I knew when I got home from work Wednesday evening she was in trouble. Lethargic. Eyes in a faraway place. When I picked her up to take her to the animal emergency room, clumps of hair fell on the floor.

I appreciate that Denton has an animal e.r. I told myself it was possible that they could get her blood sugar back in balance and she would be back home, but I also was no fool. I declined the diagnostic bloodwork and I checked the “do not resuscitate” box.

I left her there, a clean and well-lighted place, and slept through the phone call that came at 1:21 a.m. When I awoke at 5:15 a.m., to dress and go pick her up, I saw the messages waiting. I didn’t need to listen to know.

I always wonder what a veterinarian thinks of you when you decline care. I loved Dixie. She came into our lives just two years ago and she took up a big spot in my crusty old heart that has already been through fire and rain.

When Dr. Cody Bullock diagnosed her diabetes last November, he told me some people opt right then to put their dog down and he said wouldn’t judge me if I did. I didn’t flinch. We did a good job giving her insulin twice a day and helping her adapt to her blindness. But, looking back on the past few weeks, there were signs something was amiss. She was eating less dog food. (But so was Gus, so I thought it was just summer appetite). When we were outside in the evenings, she foraged for cicadas and grasshoppers (dead, of course) to eat. A few weeks ago, she vomited. She recovered. But it was black. She was bleeding somewhere.

I kept a close eye on her, but then there was a death in the family. I left for a few days. And then I worked two Saturdays in a row. I probably missed a clue somewhere, but I’m not going to beat myself up about it.

My little sister called me yesterday. Her dog was in trouble. Grand mal seizures. Awful ones. Not sure yet what’s causing them. So far not under control either.

She’s bracing for the worst. But she told me up where she is, in Park City, there’s a vet that comes to your house to euthanize a pet.

I wanted that for Dixie. More than anything. Doggie hospice.

My heart was already aching.

And again, I didn’t get to say good-bye.