My grandmother’s 90th birthday was was her last.

We knew that. Her cancer was untreatable. She had been blinded by macular degeneration years ago. She sent word through the family that she wouldn’t be sending Christmas cards anymore.

It’s a big family, on my mom’s side. My mother is the oldest of nine. I’m the oldest granddaughter of, um, about sixteen, or so, I think. I haven’t met all my cousins. Many are still in Wisconsin, but not all. The great-grandchildren number more than 40, and yes, I believe there are great-great-grandchildren, too. My youngest uncle is only two years older than I am.

What can I say, except we’re a big, Catholic family.

Except about 10 years ago, Grandma let go that we weren’t always. Mom went back to meet the cousins in Northern Ireland. My great-grandfather came over from Ireland as a Presbyterian. He never sent for his family. He married my great-grandmother, shown in this photo with my grandmother. 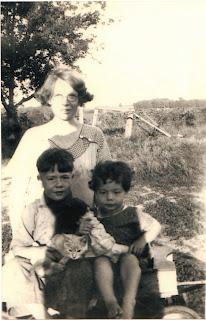 My grandmother liked ham sandwiches and drank black coffee no matter what. She knew everything there was to know about babies. She was loving, but not a sentimental person nor the keeper of scores of family treasures (if there even were any).

She liked tossing out the old and in with the new. Grandma was in the moment.

But she was always stitching something. She was the first relative to show me the value of handmade gifts. One year, Grandma and Grandpa made all the granddaughters doll beds of wooden spools and cut coat hangers. They were canopy beds, and mine had pink flocking. I couldn’t believe I got the pink one. In my seven-year-old opinion, it was the prettiest of all the beds.

Whenever I visited my grandparents, which got harder and harder to do as the years went by, I would get a tour of the house to see the latest creations. It was as good as touring a folk art museum.

There were other family secrets Grandma never shared. Some we knew, but couldn’t speak of, because she wouldn’t acknowledge them. Some we learned from Aunt Bea.

Aunt Bea, the originator of the family’s sweet roll recipe, and the speaker of family secrets.

Grandma probably just found out how much her sister Bea let on. Don’t worry, Grandma. It’s all good. It’s all about the love. You knew that and so do we.