All the Wolfe children went every summer for as long as they were eligible. Kids “aged out” in middle school. One of the organizers told me that was because middle school was about the age that kids would start finding ways to get into trouble.

As far as I can tell, the program ended rather unceremoniously in 2002. I don’t know if the people who ran it just ran out of steam or if the kids started “aging out” a little sooner.

Sam went as soon as he was old enough and he went every summer. The first summer we worked closely with the organizers to make sure Sam didn’t get lost going from building to building. After all, he was only a rising 4th grader! We took advantage of several quiet evenings on campus, the week before it started, to practice finding his classes. He did well, only getting lost once, on the first day, (there were four classes to find) and the staff helped him make it right.

The program helped Sam develop some independence and think about school in different ways. They had all kinds of fun classes in topics like rockets and printmaking and magic-making and video production.

Here’s what remains from the video production class. Paige rescued what she could from the copy we had that was getting magnetized.

Sam and Michael liked the magic class so much I’m pretty sure each of them took it more than once.

In one class, Sam learned to write music. I was surprised when he came home at the end of that session with this:

It was and is a sweet little tune.

When I unearthed recently, I put it up on the piano and tried harmonizing it very simply. I asked Sam, did I come close to what he imagined? He told me that’s the sort of thing that he thought musicians should be able to arrange and produce how they want.

I’ve often wondered how much guidance the teachers provided with such projects. Paige was 4 or 5 years old the last time we went to Bear Valley Music Festival. She and Michael participated in a summer art program at the little library that had them making collages with wallpaper samples and objects they found on nature walks.

Paige’s piece took my breath away, with the little bird in a nest perching above the boundaries of her collage. Did the teacher do that or Paige? 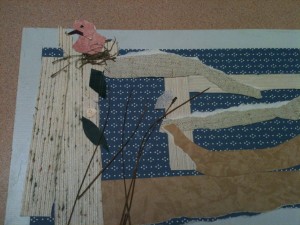 Posted in problem-solving, What Sam says