If I ever doubted that no good deed goes unpunished, the lesson was reinforced today.

Michael had a job interview and asked to borrow the truck, since the air conditioning is out in his car.

(This is February, you say. This is Texas, I tell you.)

So out of his routine was he, that when he returned to the truck after the interview, he realized he locked the key inside. He called to ask whether there was a hide-a-key.

(No, son, a hide-a-key is something parents make their kids do with their own car.)

He didn’t want to pay for a locksmith if Sam could come with a spare. There was time. Sam loaded directions in the GPS on his phone and headed out.

Sam is not a fan of I-35. E or W. He took State Highway 114 and headed south on Precinct Line Road to where Michael was, in North Richland Hills. That was probably a mistake. Maybe U.S. Highway 377 would have been better. He got lost somewhere in Keller — so lost that he pulled over and called police to get help. They came and gave him directions.

Sam made it to the parking lot where Michael was waiting and the two of them were supposed to follow each other to I-820, where they would part ways at I-35W.

I thought all was well and then Michael called me again.

Every parent of a child with autism knows this terror. And now his brother was learning it, too. Michael recounted as much of the situation as he could, starting with the moment he realized Sam was heading down State Highway 183 the wrong way, and I was at a loss of what to suggest next.

Sam had turned his phone off to save battery life. That worried us both. Not only was he not communicating with us, we knew “Siri” wasn’t giving him directions home.

A co-worker (one of several that talked me off the ledge today) offered to take me home and Shahla provided a bit of support via text. Meanwhile, Michael was making a report with the police. I so hoped that Sam would be parked in the driveway when I got home, but he wasn’t.

I put an alert on Facebook and started to regroup. I would take Michael’s car and meet him and the police in North Richland Hills where they were making a missing persons report. (Because Sam has autism, it would have gone out immediately.)

And then Sam came down the driveway. I called Michael. The police shredded the missing persons report Michael had just signed. 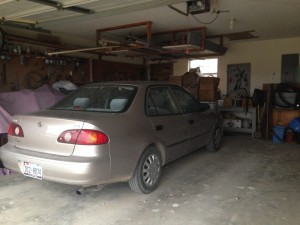 It took awhile for the emotions to settle and the conversation to begin. Sam knew he had separated from Michael and had been going the wrong way down the highway. But he remembered the directions Michael gave and when he was sure things weren’t looking right, he turned around and went the other way. He stopped at a medical center to get directions, too, and then he headed home.

(So, Tim Ruggiero, not only pizza places, but also medical centers are good places to get directions, we learned today.)

We gave ourselves a list of things to do, like Michael joining AAA, and Sam putting GPS in his car with a “home” button, and me putting a hide-a-key on the truck, so that all our good deeds trying to help each other out don’t get so punishing.

And, a big shout-out to all of the mid-cities’ finest. You got to know autism today and you did well.

Posted in adults with autism, decision-making, driving, getting back on the horse, love, problem-solving, self-advocacy