The adorable photo of the girl in the jumper comes from the Women and Girls Lead Facebook page and has been pinned around cyberspace. I saw it on the page of a comrade in single motherhood. It made me think back when Paige was in kindergarten and first grade and she went after school to the community dance program at Texas Woman’s University. For a while, she learned ballet, then she tried another dance class that mixed up the styles a little more.

You could see, even then, that she was a talented dancer, but she tired of it. I didn’t make a fuss. 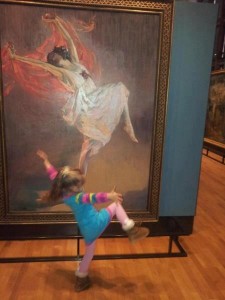 If she thought of dance during the rest of elementary or middle school, I didn’t know it. For all I knew then, dance had only been an early childhood interest. But when the high school marching band added a color guard, she was all in, not just with the flags, but the dancing, too. Such a personality she had during performances!

Sam’s younger years were a gift to his siblings in some ways. We were trying so hard to get Sam to “average,” we didn’t  fall into those traps that so many anxious parents fall into with their kids and their extra-curriculars. Michael and Paige tried out lots of different things: music, sports, leadership, theatre, and 4-H.

And that was a beautiful thing. Paige worked hard with her dancing in high school. Yet, because it was never a chore, never something she did to please anyone but herself, dance will be a lifelong love. 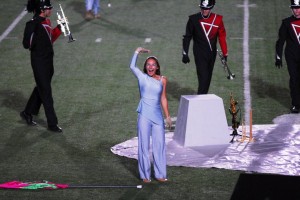 It’s a good thing to remember when you’re sinking $200 into gear or lessons. I never let myself think it was an investment in a future, four-year scholarship. It wasn’t something to distinguish my child from their peers. It was something to allow them to stretch and explore and learn and feel and discover who they really are.