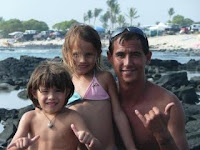 Our family has been touched again by tragedy.

My cousin Caleb’s mother left his dad, my uncle, when Caleb was very young. We had to wait until Caleb was grown to see him. We are so grateful he wanted to know us, because to know him was to see and know aloha’s true meaning.
Below is the titular essay of this blog, where you can know a little of Caleb, too.
Family Room
Chris painted a Mardi Gras mural in the family room downstairs after Karen and Greg moved into their Loveland house. In it, a girl sashays to the music, her necklace swinging to the beat. Light shines from party rooms down the street. Up close, the corner bricks feel real. For a time, Greg’s first anniversary present to Karen, a painting, hung in the family room, too. For a first anniversary — for “paper” — that’s a beautiful idea. Their family room seemed a good place for a golden anniversary party. Come and go. Say hello. Sit outside if you want. Escape to a quiet room, if you need.
Friends came. In-laws and exes came. Family came from next door and far away, Arizona, Hawaii, Illinois, Texas, Utah, and Wisconsin. Even though Don and Carol were the guests of honor, Phil found the easy chair. They wore tunics, silk dresses, crisp shirts and sport coats, jeans and t-shirts. Greg changed his clothes. Outside the family room, in the back yard, Bill took pictures of every permutation. Cousins, siblings, daughters, nieces, grandkids. Bench, stairs, trees, grasses, sky, clouds. Peggy and Chris took off their fancy shoes and went barefoot like Caleb after that. Greg changed his clothes again.
Karen put a big bowl of M&Ms in front of the big screen TV. She was in charge of the caterers, who brought teriyaki chicken on sticks, Swedish meatballs in white gravy, and spicy tortilla rolls with bean dip. They put extras in the oven and refrigerator, which we forgot for a while. Chris was in charge of the frosty orange punch made of ginger ale, juice and sherbet, but Peggy broke the punch ladle. Andrew was in charge of two cakes — one of three towering tiers, wrapped in blue ribbon, glazed with red raspberries, bordered with delicate dots, and topped with flowers; another made with crunchy carrots and nuts. Perry was in charge of the wine. He laughed when Greg put foam tops on the Guinness Stout.
Don said there were more guests and less time to visit than he expected. One friend came with his wife. After saying hello, they made themselves comfortable in the family room, visiting with other guests. When it was time to go, they teased the happy couple, “Thanks for the conversation.”
Jeremy played the ukulele. When there were too many people in the family room, he and Caleb took two carloads to the go-cart track. Although they knew how to get there, no one seemed to know where they were, except that Michael said they saw an eagle there. Janelle giggled when someone said Helen took too many pictures while she drove her go-cart, and Sharon caused a pile-up.
On the TV, behind the bowl of M&Ms, Teresa showed a music video she made using photos showing the early years; November 7, 1959; all the girls; travels; and the grandkids. Upstairs, Karen had filled a wall with ten of those photos.
After that, Don and Carol lit the anniversary candle and cut the cake. Some people ate cake with a spoon when the forks ran out. Then, Peggy and Karen and Greg scavenged for forks, washing them to reuse them, at least, until the carrot cake was all gone.
Guests asked again to watch the movie starring Don and Carol, with supporting characters Peg, Chris, Karen, Teresa, Mark, Matt, Greg, Perry, and . . . Ron, Sam, Michael, Paige, Carter, Matthew, Brandon, and Mandy.
By twilight, friends had gone, taking a shortbread cookie, frosted a blue 50th on white, for a party favor. Kyra and Sara had already taken many shortbread cookies, since they were at the right height for small arms and hands.
After a futile search of the family room, and the rest of the house, for the lost remote, Carter and Tammy and others played “Catch Phrase” instead of “Scene It.” Hot potato meets Taboo. Tick-tick, tick-tick, tick-tick. BUZZ.
Then Carol made a small circle of chairs near Edith, announcing she would open cards, some of which came with gifts or $50 bills because a few guests simply refused to follow instructions.
As the caterers came to collect their satiny blue tablecloths, platters and serving trays, everyone helped clean the family room. Greg was in charge of the trash. While everyone else was busy in the family room, Matt decorated Don and Carol’s Grand Caravan with window paint.
“Just married — 50 years ago.”