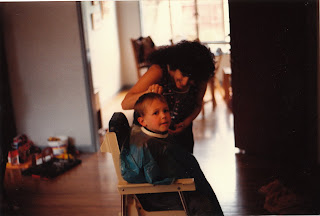 Like most kids with autism, Sam couldn’t tolerate having his hair cut when he was little. I ended up having to cut his hair in his sleep.

It worked fine when he was a toddler, although one night he kept waking up and fussing while I was trying to cut his hair, so I stopped. The next day, we went out somewhere to get some carryout and walked past a table with a couple of older men having a cup of coffee. One of the guys looked at Sam and said, “Son, you need to have a talk with your barber.”

Mark and I burst out laughing. And I told the man the job would be finished tonight, and no payment was due the barber fairy.

Eventually, our next door neighbor, who was a stylist, said she’d give it a go. We’d do it at home, putting him in the high chair and setting out a mirror. Judy would bring her supplies to the house.

Judy was really patient. Sam was fond of telling her what to do, and Judy went along with it.

When we left California, we weren’t sure we’d find someone like Judy, but we were wrong. Connie Clark stepped right in. Her big heart and boundless sense of humor got Sam from kindergarten haircuts through middle school.

Haircuts at Connie’s became a family affair. Everyone took their turn in the chair — another thing Sam could be in charge of, who’s turn it was next to get a haircut.

We followed her over to Robson Ranch when she moved her shop from Argyle, and that old converted gas station, to a real salon. Even though most of her clients were older, we still came as a mob.

Connie got cancer and eventually she wasn’t strong enough to stand all day and cut people’s hair. Mark started taking the boys over to Unique Stylists in Denton. After Mark died, Sam kept up his appointments with Wayne. He never lets his locks get very long.

When a life is touched by autism, it touches thousands of other lives in ways you can’t imagine until you are there, watching. Connie was one of those people who helped Sam navigate to a fairly independent, normal adult life.

Just by cutting his hair. 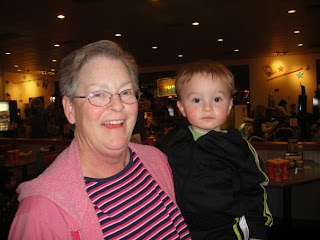