Sam lost his sunglasses in Germany.

There wasn’t anything remarkable about the sunglasses themselves. They were a pair of sunglasses that had been lying around the house for years, a little scratched, but durable both in their purpose and their terrific ability to avoid getting lost the way most sunglasses do. 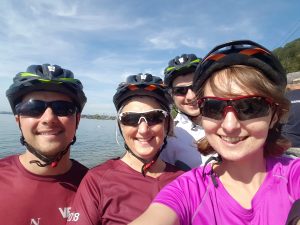 Sam, myself, Michael and Paige on the Lake Constance bike trail from Bregenz, Austria, to Lindau, Germany.

The loss, though, became a valuable lesson for our family.

I knew the trip would challenge us, biking more than 150 kilometers over the course of five days. At the end of the first day’s two-hour ride, Sam turned to us and said he was confident that he had trained enough for the trip.

He had been a little nervous about it, but we set out on hourlong rides several times a week in the months before. Inspired by Michael, he also hooked his bike up to a wind trainer for regular spins.

The third day, our second full day of riding, set out as our longest ride of the week. We left our hotel in Lindau to cycle to our next hotel in Uberlingen. Most of the people in the riding group took the shortcut, taking the ferry from Friedrichshafen to Meersburg to finish the ride. We met the group and told the tour leaders that we wanted to cycle through the orchards and vineyards rather than ride the ferry. 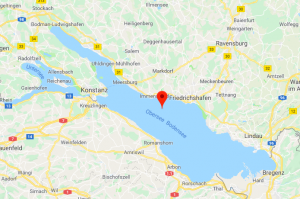 About halfway to Meersburg, we stopped to refill our water bottles and have a snack. Sam asked where his sunglasses were. He thought someone had grabbed them for him in Friedrichshafen, where we all took a bathroom break.

No one had. Sam asked if we could go back and get them. Michael told him, “Sam, there’s no going back. We’re already pretty far from Friedrichshafen, and we’re riding 40 kilometers today.”

Sam protested briefly, but got back on his bike and plowed ahead. When we arrived at Meersburg for lunch, he was still upset. We sat at a table beside the lake and Sam tried to explain. It wasn’t going well and people were starting to stare. I invited Sam to take a walk with me to the water’s edge so he could collect his thoughts and I could make more room for listening.

There was another family walking on the little beach with their German shepherd. They threw sticks into the waves. The dog wouldn’t venture past depths over its head, but it worked hard to bring back every throw.

Eventually, Sam was able to collect his thoughts.

He understood that sometimes we help him out as a trade-off, to get things moving faster, especially when being slow is risky. But when he is responsible for himself, “I need more time,” he said. And he said that it was clear to him on this type of excursion, a person has to be responsible for themselves.

Most of us human beings don’t have enough self-awareness to assess these kinds of scenarios, let alone ask simply and directly for the fix. Sam constantly amazes me with this gift of his.

We went back to the table and announced the findings. We all agreed we could and should slow down our transitions. Paige asked Sam about a checklist. What if each of us went through a checklist, like an airline pilot, before we cycled on? The process helped us slow down for Sam and, at one point, also kept me from losing my cycling gloves. We often were the last ones of the cycling group to leave, but because we rode fast, it all worked out in the end.

I told Paige later that day that I did have a secret hope that the trip would stretch the family, although I wasn’t quite sure how. I hoped we wouldn’t be miserable, but I didn’t worry about it either.

Learned helplessness does someone like Sam no service at all, and some of that was coming from our habits to take shortcuts and speed things up. He deserved more from us. We learned we could step back, let some conflict points rise up and not freak out. After all, Sam is a grown-ass man.

Posted in adults with autism, problem-solving, self-advocacy, What Sam says