The kids and I just finished a week of bicycling in the Bodensee region of Germany, Austria and Switzerland Saturday, arriving home Sunday night.

We had a wonderful time. There was good wine, great cheese, and lots of beer, too. This is the second time I’ve explored another country by pedaling the backroads with a small cycling tour. I cannot recommend the experience enough. Paige and I got to know Ireland while cycling the “Wild Atlantic Way” last year. Michael and Sam joined us this year cycling through Alpine farming villages and along the shores of Lake Constance.

We did our best to speak German to the locals, respect the rules of the road and be all-around good representatives of our country. We tried not to be obnoxious Americans, but that’s harder than you think. We each had our moment (well, except maybe Paige) where we stepped in it at least once.

My chance came the second day of riding. It didn’t take long to realize that bicycling is king in Germany. So many people in Germany ride themselves that they see and respect cyclists when they are driving. But they also are efficient people. Leave a gap in your cycling group and they will fill it in the roundabout. Our first big run through a traffic-filled roundabout, I left a gap but kept going trying to catch up to the group. A driver took my hesitation as his turn to enter, but braked at the last second (thank goodness). As I pedaled on through, he yelled at me in German. I tried to give him “I’m sorry, I’m from out of town” smile, but I don’t know if those are universally understood.

Michael’s turn came the third day of riding. We parked our bikes at the bottom of the hill and hiked up to Meersburg Castle. We bought admission tickets for a self-guided tour and managed to enter the first room just as a special guided tour began. We stood politely for several minutes as the tour guide spoke much German very fast. We felt it would be rude to move through before the group was ready to move. But when we did, one of the ladies on the tour stepped in front of Michael and eagerly spoke even more German to him. We were flattered she thought we were so fluent. I again tried to flash that “I’m sorry, we’re from out of town” smile. The tour guide took pity and said the woman wanted us to know that they had paid extra for the guided tour and we didn’t. Could we please hang back for just a bit? After they moved to the third room, we were able to push on past, which was fine, we wanted to get to the room with all the armor displays anyways.

Sam’s turn came the fourth day. It scared me a little bit. We rode to Reichenau Island and stopped for lunch at a popular roadside restaurant (for what did turn out to be the best fish we ever had). Many other cyclists had the same notion. It was hard to find a place to park your bike out of the way.

Sam had come so far on this tour, taking charge of his gear and following the rules of group rides and the road. He was trying to park his bike tight in, the way a good German cyclist would. He didn’t notice that he was maneuvering in a way that kept another fellow waiting as he was trying to extract his bike and leave. I pointed it out, and Sam got out of the way, but apparently not fast enough. The man decided we were annoying tourists and made a move that would have gotten him punched in the face in the U.S. – he got in front of Sam and stood quite close without moving, expecting Sam to return his reproving eye contact. I held my breath. Sam was tired from our ride. He was fiddling with his helmet and looking at the ground, completely unaware of the confrontational stance in front of him. The guy didn’t know what to do, so he left, muttering German curse words the whole way. 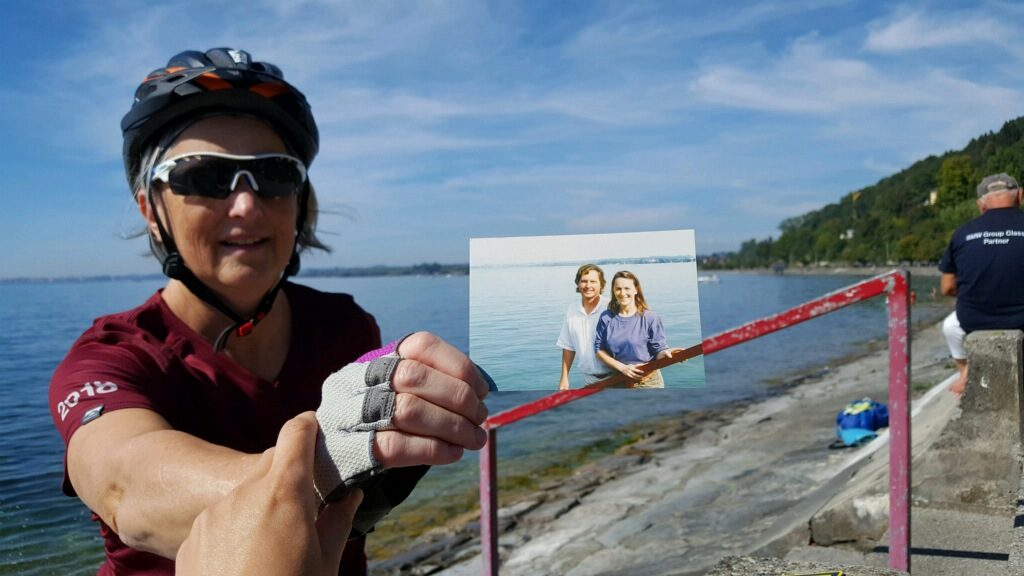 Paige helping me hold photo of Mark and me on Lake Constance from summer 1997, when the Dallas Symphony launched its European tour at the festival in Bregenz.