A friend brought a jar of honey by today. Making a batch of Puffs-o-honey had been on my to-do list ever since we left Trader Joe’s two weekends ago loaded with all kinds of items for the pantry, including four bags of puffed grains.

I would have bought Puffs n’Honey if they’d had it. It’s made by the Bread Shop, but I don’t know any retailers that carry it here.

It’s hard to get even mainstream items. I asked Albertsons off and on for years to get Grape Nuts Flakes. The store manager said he would get requests for it from time to time (probably all mine, he just wasn’t remembering) and he was having a hard time getting it. I about fell over when I saw it on the shelves for the first time two months ago. Also because it was $5.19 for a box.

Puffs n’Honey was one of Sam’s favorite cereals as a child. When I couldn’t get it here, I experimented with adapting granola recipes to make it. He was almost giddy watching me put a batch together tonight.

“Doesn’t it give you memories of California, Mom?” he asked.

Yes, with Trader Joe’s, the local farmer’s market and my own garden, it’s only taken 20 years to get back the kind of cooking we could do back in Sacramento.

So, here it is. Plain, the way Sam likes it, but vary it by adding spices you like — a couple teaspoons of cinnamon or cardamom, for example. Arrowhead Mills makes good puffed cereals.

Cool slightly, then pour over cereal and toss to coat. 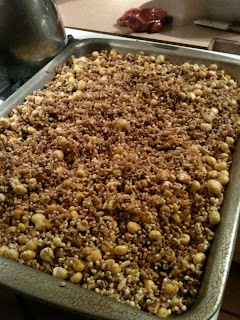 Posted in recipes, What Sam says