Here are some cocktail recipes my co-workers helped me taste test, here at the house, on a recent Saturday night, playing Cards Against Humanity.

We’re good people. Really we are.

I didn’t set out for the party to have a cocktails-with-a-literary-twist Tequila Mockingbird theme, but it did. I think that’s because we writers enjoy a good drink.

We’ve done this before, except mixing up old-fashioneds because that’s what Don Draper did.

We tried out recipes I found in the newspaper. I clipped a page from the Denton Record-Chronicle years ago and kept it because it had recipes for saffron cocktail onions and preserved cherries and tiki drinks that needed falernum.

It’s hard to find falernum. Charles Dickens described it in his literary magazine, All the Year Round, as “a curious liqueur composed from rum and lime-juice.”

I made some and we used it to mix up Losers, which was barkeep Todd Thrasher’s take on the rum swizzle. 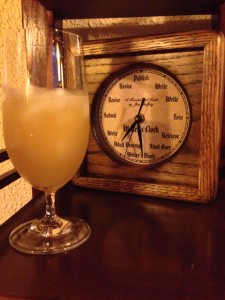 A glass of The Loser being served during the Adult Beverage Hour of the Writer’s Clock.

And we downed a pitcher of some of the best sangria I’ve ever had, my-and-my-daughter’s take on a recipe in The Guardian.

10 limes (organic, you’re going to use the peel)

Peel the limes, taking care to cut away any of the white pith. Combine the peels with the cloves, almond, sugar and rum in a large glass container. Store, loosely covered, in a sunny place for three days, strain and discard the solids. Pour the liquid into a jar or bottle and cover. Store at room temperature.

(You can juice the limes and save it for another use … such as mixing up Losers.)

Fill a highball glass with ice. Add falernum, rum and juices. Pour into cocktail shaker and back into the glass (because, like Bond’s martinis, this cocktail is better shaken, not stirred). Garnish with a slice of pineapple, if desired.

Slice the orange thinly and muddle in the bottom of a large ceramic pitcher. Open the wines and pour in the pitcher with the brandy and madeira. Chill for a day. About an hour before serving, combine sugar and water in a small saucepan and heat until the sugar is dissolved. Let cool slightly and then pour into a large pyrex glass measuring cup (at least two-cup size). Add enough orange juice to reach 2 cups and then combine with wines in the pitcher. Add several cups of ice before serving.