About this time every year, Mark and I would be negotiating over the spot where the turkey fryer would go. When the boys were younger, he often deployed it those evenings we made venison burgers on the grill and we needed to make as many French fries as a fast food restaurant fryer holds. That turkey fryer helped feed those boys with hollow legs. If Mark kept it close to the grill to manage the job as I worked in the kitchen on the rest of the meal, that was fine with me.

But the second or third year we made a fried turkey in it, Mark splashed. If he hadn’t been so swift at turning off the gas, we would have had a real problem. And by that I simply mean meat too randomly charred for consumption even by Wolfe family standards.

The incident didn’t phase my slightly pyromaniac husband. But I still reminded him each year that this wasn’t the way to share Thanksgiving dinner with the good folks of Emergency Services District No. 1 and it might be best to move that fryer just a little further away from the garage.

After Mark died, I gave the turkey fryer to my sister and brother-in-law, who raised two professional firefighters. They use it a lot for shrimp boils. And, I went back to this collection of Thanksgiving dinner recipes I started when the Fort Worth Star-Telegram would talk a local chef into helping a hapless reader — usually someone who barely cooked at all — develop a menu and practice it once before the big day.

I always admired the many ways those chefs could come up with a way to roast turkey. But I was collecting recipes for the sides and desserts to go with that big fried bird. The first year I made the pepita brittle, it almost didn’t make it to the table for its intended purpose garnishing the pumpkin flan. The soups were marvelous. And so many inventive ways to serve the cranberries. It’s a nice collection.

After a few years without our turkey frying guy, the kids and I appear to have settled on a favorite way to roast that big bird, a recipe that uses just the breast. Tonight, it just occurred to me why it may have become the favorite. Here’s the recipe for a hint: 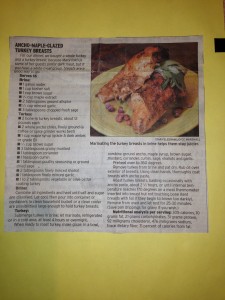 The house is filled with the smells of smoky chile and maple. Texas plus Wisconsin. They go good together. 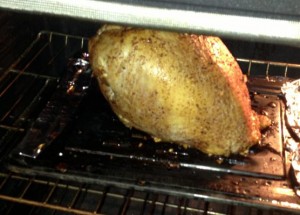 Turkey in the oven

Posted in getting back on the horse, love, recipes, social life