Even before airlines got in the business of charging for your luggage, I packed as little as possible. I spent a week in the Florida Keys with my sisters living out of a small suitcase. My inappropriate dress for an impromptu dinner at a swanky tapas restaurant in Key West notwithstanding (hey, it was ok for Sloppy Joe’s bar, plus it was pouring rain most of the day), I believe I still packed too much.

The last time Mark and I spent a week in Hawaii, we took one large suitcase between us. The only time I flew with more than I could carry was on the way home from Japan. I spent the fall of 1986 there as a music student and visiting artist. I flew over with one euphonium and came home with two. I brought back reams of sheet music, both original compositions and inventive arrangements. I managed to keep everything confined to a trunk and carry-ons. When I got off the plane, I rented a cart and yet could barely balance all the luggage as I wheeled through Honolulu International Airport.

Over the years, little of what I brought back remains. I’d always suffered from TMJ, but it became untenable 15 years ago and my horns went in the case for good. After Mark died, I sold them and donated all our music, including what I brought back from Japan, to our alma mater.

I hung on to a few small things over the years that I treasure from that time, including a set of eight Japanese prints that I was finally able to get framed earlier this year. 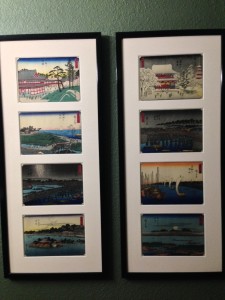 During my time as a student at Kunitachi College of Music, I took a history of Japanese music class taught by a brilliant historian who, unfortunately for me, didn’t speak much English. (My Japanese was terrible.) Another student attended class with me to translate. Hiromi did her best to explain. The professor was kind and gracious. At the end of the fall term, he invited Hiromi and me to his home for lunch and tea. He wanted us to see his traditional garden and his collection of wood block prints, which Hiromi told me was famous. He seemed to have tended to every branch and blade of grass in his tiny garden. He filled one room of his home from floor to ceiling with boxes of traditional wood block prints. It was like being in the back room of a great museum with the collection’s curator. He wanted me to have one set as a gift. I was stunned. When I picked a brightly colored set that wasn’t very valuable, he told Hiromi to tell me that I really could have any one I wanted, even a valuable set. I demurred. I think Hiromi helped us both save face by reminding him that Americans have odd taste.

He put the set in a little manila envelope. That envelope managed to move from Japan to Colorado, and then to California, and finally to Texas intact. I was lucky. In 1996, Mark and I met a lovely couple through church. When Mark learned that Marcy was a conservator, he showed her the Wolfe family Bible and asked for her advice on how to best keep it and some of the items that had been tucked between its pages, including a braided lock of blond hair.

Somehow my little collection of prints fell out in that show-and-tell. Marcy saw them and said they needed to get out of the manila envelope. She helped me put them in acrylic sleeves. They sat in the conservation box with the family Bible for another 20 years.

After I sold the farm, it was time to get them framed. Museum glass and everything. I had so little left from Japan, I wanted to enjoy these prints.

When I dropped into Art Alley and pulled the prints out of the acrylic sleeves, I watched owner Randy Axtell’s eyes pop as he took a step back. “Oh wow. These are the real deal,” he said. He measured and measured again. We made a careful plan for framing.

Randy urged me to write the story of how I came to own the prints and put it on the back of the frame for posterity.

This is the start of that story.

I still don’t know a thing about them. I would imagine some expert would tell me they are all hung in the wrong order or something.

That’s not what’s important to me. I love the bright colors and the scenes they depict.

These eight pieces of paper have endured.

That’s a story right there.