I had the pleasure of sharing some of Aunt Regina’s recipes with Ashley West when I spent the afternoon with her recently. She cans preserves and pickles and sells them at the Denton Community Market on the Farmhouse 43 label. We featured her in a recent story to advance the fair. Ashley ended up winning six ribbons for her creations, including two blue ribbons. (I bought a jar of that blue-ribbon blueberry mojito jam last weekend. Yum.)

It was nice to spend a little time with someone who appreciates what can be found in old recipes.

Like any good cook, Aunt Regina collected a lot of cake recipes. I’ve shared a few here and here. I’ve noticed that her collection favors pound cakes. I like them, too. They are easy to make and they keep well. No fancy decorating required either. Top with fruit or whipped cream.

This one calls for a glaze. I don’t know the history of this recipe, but I checked what some Internet Peoples had to say about it. I’ve seen references to its publication in a Southern Living magazine in the 1980s. J.R. Watkins has a variation on its web site.

Given how many extracts the recipe calls for, it seems a recipe like this would have been developed in their test kitchen.

But, if it was good enough for Aunt Regina to write it down and keep it in the accordion file, then it’s a keeper. 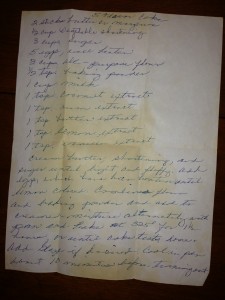 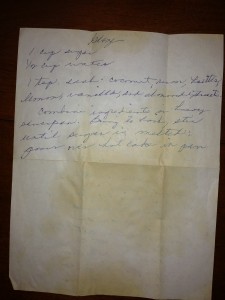