I pulled out my file of old-school cakes from Regina’s recipe collection to look for something new- to-us. We may have an occasion soon that calls for cake.

I got excited when I read the earnest description Regina’s friend, Doyline, wrote at the end of this recipe. “It will rise and then fall. It is supposed to do this.”

When it comes to Regina’s old-school, cook-from-the-box cake recipes, I’ve learned to roll with it, but this one has a real problem. It calls for Betty Crocker Butter Pecan frosting mix. The good people at General Mills don’t make that anymore. After a bit of research, I’ve learned that it’s been so long since they’ve made this product that it doesn’t even show up on the purge-your-coupon-collection lists. (And also, I found a Facebook group “Hey Betty Crocker Bring Back Rainbow Chip Frosting” with nearly 6,000 members, but I digress.)

Except for Fluffy White, Betty doesn’t sell box mixes anymore, just frosting by the can. Online, I found one recipe that took its inspiration from this old-school recipe. It calls for you to fold in a can of the coconut-pecan frosting, instead of the mix, the pecans and the coconut. But I think I might try something else. Trader Joe’s still sells vanilla frosting mix in a box. And, maybe toasting pecans in butter and salt before folding them in. 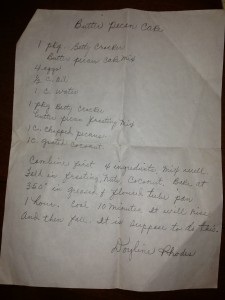