At last weekend’s Denton Blues Festival one vendor was selling Sock-It-To-Me cake and I was reminded of reams of recipes Regina had for cakes. 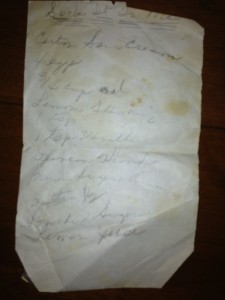 There were so many we didn’t take the time to talk about all of them, but occasionally one would capture Regina or Patti’s imagination. Regina said Sock-It-To-Me was so good.

Regina must have made Sock-It-To-Me cake a lot, because this was her recipe.

(You might be better served finding a recipe elsewhere. I’m told it’s often printed on the box of Duncan Hines cake mix, the way that the recipe for Rice Krispies squares is usually on the cereal box. But I also have seen from-scratch recipes for it on baking blogs, too.)

When we found the 7-Up pound cake recipe, Patti said it was good, but she wasn’t making it anymore because she couldn’t find 7-Up in the store. “And don’t make it with Sprite. I tried. It’s TERRIBLE,” Patti said.

Regina said she gets 7-Up at the dollar store all the time. 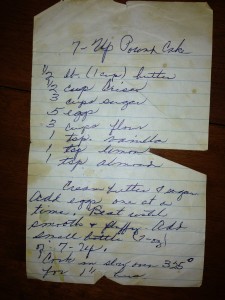 I bake cakes from scratch, because cakes from mixes taste waxy to me. Many of Regina’s recipes are from scratch, but not all. My sister, Karen, and I wondered aloud if anyone who cooks seriously still cooks that way (clearly they do, there’s a quarter of grocery aisle committed to cake and frosting mixes). I think it’s interesting that to Regina’s way in the kitchen, if it was a good recipe, it survived. I don’t remember any cake she served ever tasting waxy.

Next week we’ll get back to DIY for the pantry.