Sam was spared the agony a lot of us get in the home stretch for a new job: the long wait between a successful interview and the offer. On Friday, one rolled right after the other for him. He had the best smile when he announced over dinner that WinCo hired him to work in the warehouse.

Sam sacked groceries at Albertsons for ten years. He didn’t want to become a checker. Sometimes customers are impatient. “I wouldn’t be fast enough for them,” he said. He didn’t want to stock shelves, either. I shopped late enough on the occasional Friday night to see those guys at work. Sam couldn’t be that raucous.

Nothing came his way after he graduated with an associate’s degree and certificate in computer science and technology five years ago. It was frustrating. Once I asked a manager at Albertsons if there was a way for a loyal employee with an education to move up. She shook her head no. There aren’t corporate offices here, she said.

Then Sam got a call. WinCo was opening a warehouse in Denton. They wanted to try to hire people like Sam. He would have to quit his job at Albertsons; participate in a special, six-week training class; and interview for the job at the end. There was no guarantee he’d have the job when he finished the training. In addition, he would only be paid when he was handling actual store product in the warehouse. Otherwise the rest of the training time would be unpaid. This was a Goodwill Industries program. The training included a lot of class time on “soft skills,” like getting along with co-workers, deciding when (and when not) to disclose your disability, interviewing techniques, and the like.

Sam had been in the work force for a decade. He’d been there and done that. It didn’t seem fair for him to quit a job and go without pay for four weeks. But I know I can be skeptical. It’s an occupational hazard. I kept my mouth shut. He had a chance at a job that would quadruple his take-home pay.

(Some nights he’d come home, relay what they learned that day and I’d muse over how it might be nice for the newsroom to get a “soft skills” refresher from time to time. We often seem barely house-trained–myself included.) 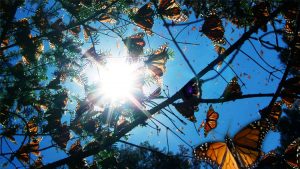 Image from Nova: Journey of the Butterflies

This week was all butterflies. I missed the open house Sunday, but Michael and Paige went with him to see for themselves what he was shooting for. We were prepared to help Sam update his resume. No need, he said, the program folks already got his resume all wrapped up. Did he want to do some mock interviewing? Nope, he said, he’d already practiced and had notecards with sample questions and answers. He’d just look them over each night, thanks.

He was visibly nervous Thursday night. A lot had lead up to that day. He made sure he had all his interview clothes ready to go and packed up work clothes, too. After the interview, he expected to be back out on the floor, in his bay, and he needed to wear a sturdy shirt, jeans and his work boots. I kept checking my phone all day for news, but that’s not his style. He was epically impulsive as a child, but now, he almost delights in waiting to deliver good news.

I don’t know who was smiling bigger on Friday night when he told me. If it were Michael or Paige, there would be lots of hugs and backslapping and arm-squeezing. But that, too, isn’t Sam’s style. I told him I’d like to shake his hand to tell him congratulations and how proud I was of him.

He kept eye contact as he extended his hand and gripped mine. Not too hard, not too soft. Up and down, not too fast and not too slow.

I kid you not, dear Internet people.

It was the first time in my life I’ve ever experienced the perfect handshake.