Sam said he liked the country roads best on our family bicycling trip to southern Italy. There are 60 million olive trees in Italy and I do believe we pedaled past a hefty percentage of them.

In this photo, you can see he stopped next to an olive tree that was a thousand years old. Some of them look great. Others are succumbing to a bacteria that came over with an insect stowed away on South American-made pallets. Many of the olive groves are small, family-owned plots that produce enough to supply the family with a little more to share. (You can buy olive oil in Italy the way we buy craft beer here in the U.S.) 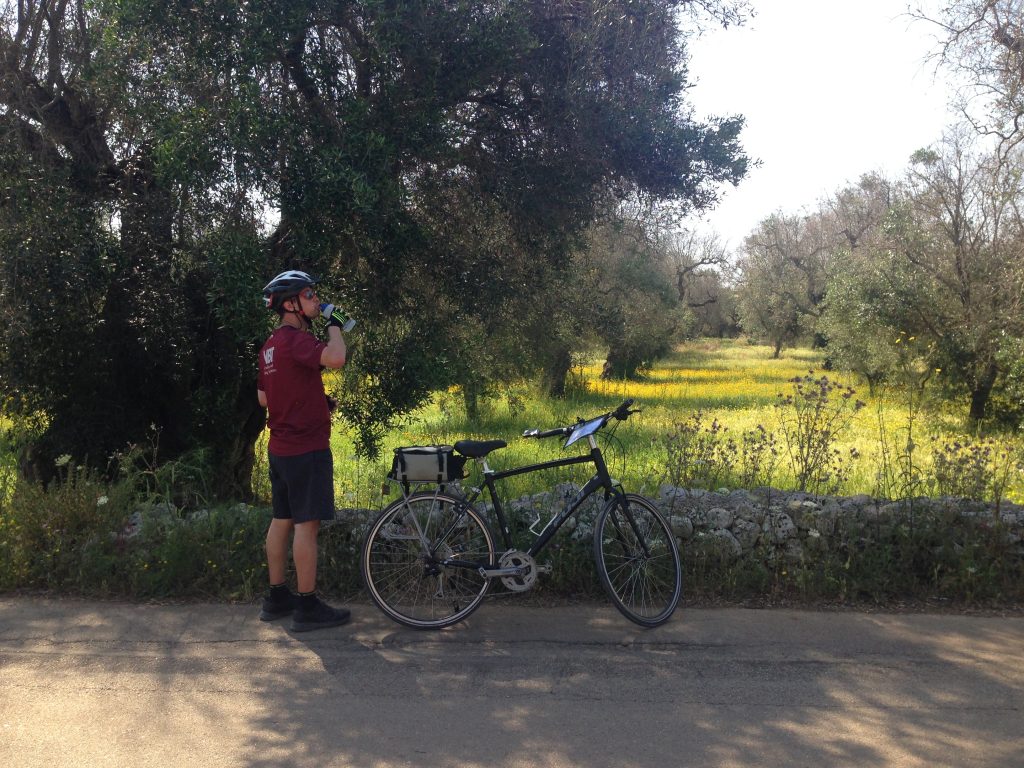 Sam stops for a quick drink during a backroads bicycling trip across southern Italy.

On the backroads, you can trade that ten-European-cities-in-seven-days experience for a different kind of intensity. What’s not to like when you share miles of road lined by stone walls with just the occasional tractor or Italian nonno driving his 1967 Renault Quattro to the village? The roads weren’t perfect, but Sam didn’t mind dodging the potholes. Once, along a highway, I watched him drift, ever so slightly, into the main lane so that he could cycle over the rumble strips.

On the backroads, you can catch the fragrance as you pedal by chamomile, star jasmine, ginesta (broom) or the pine trees. 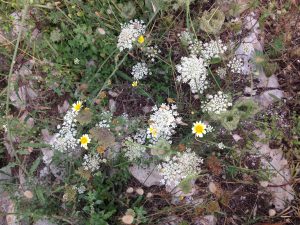 Chamomile and other wildflowers along the backroads of southern Italy.

You can see a farmer having a sandwich in the shade of an olive tree. Another farmer stops picking to pass a handful of fresh figs over the wall to a fellow cyclist. Old men sit on benches in the center of the village and wish you “buongiorno!” The village center doesn’t look like it’s changed much at all in several hundred years.

Sam was ready for the routine, having gone on a similar tour last fall in Germany, Austria and Switzerland. We pedaled a good pace and still found time to relax in the swimming pool after covering 20-30 miles each day. Nobody lost anything along the way. The only real drama came the last day.  A driver honked and then turned right in front of Paige, thinking that Paige would stop (uh, NOT) and then nearly hitting her on her bike. One of the tour leaders detoured to yell at the driver. The moment was so quintessentially Italian that I couldn’t help but live vicariously through the movie she was making for me right then and there.

Sam downloaded two dictionaries before we left the U.S. and explored the language often. He always tried to order in Italian. Periodically, he also thought of things that would increase our comfort and success in living out of a suitcase for days at a time. He inspired me to start a new checklist for our next trip — when or wherever that might be. At one point, he told me he thought he could take the next tour by himself.

He probably could, but that was never a goal of these trips. Traveling brings new perspectives. We bring some of the romance home by letting the experience change the shape of our daily lives. Sam grows through travel just like the rest of us, only a little bit more. He has always cycled a little closer to the sun. 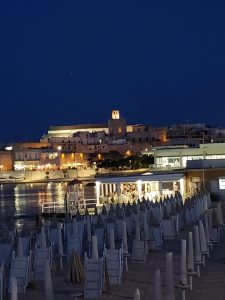