Sam and I were supposed to go to Spain last year. We booked a cycling tour with the same outfitter that took us to Italy and Germany, and Paige and me to Ireland, over the past several years. We booked before the pandemic, but even as the lockdown began, we were thinking, naively, that with a little luck, the virus would be under control by summer, when the cycling tour would take us through the countryside around Cordoba, and into Seville and the Alhambra. Ha. Spain was being ravaged by the virus by then, and our country was on the verge of its own, first big wave. About six weeks out, the outfitter canceled the trip and refunded our money.

Sam and I biked around town last summer. It was very quiet.

When the tour catalog came for summer 2021, it seemed unrealistic to make any kind of plan to go abroad. Even the handful of U.S. tours they had, though they looked to be as much fun, felt risky. But we had to have a little faith. Our world had gotten really small. I wondered if we didn’t try to make something special happen, our mental health would suffer even more than it was. The vaccine roll-out had begun. Maybe a fall tour to see the leaves in New England could be a safe bet. Surely, the virus would be subsiding by then. Ha ha.

The company’s tours to cycle in Vermont filled up fast, so we missed that. They offered a self-guided tour of Acadia that we’d heard was good. We booked for the first week of October.

Ever since the vaccine rollout, Sam has been pushing back on letting our lives get too busy again. He wants more “thinking time” for math and signal projects he’s working on. He likes the quiet pace we found, and I agree it’s a treasure to keep. While traveling to Maine was a little discombobulating (we were really rusty with the whole packing-parking-screening thing), once we got there, it was exhilarating–as you can see below, with the boys checking the view from the Bar Harbor shoreline our first night in town: 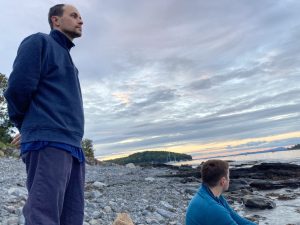 We cycled all through Acadia National Park, learned about lobstering (and ate a lot of it), watched the stars, and got out on boat rides several times. During one nature cruise, our guide, a retired park ranger, asked how many of us would have gone abroad this year but came to Maine instead. About half of the 50 people on that boat raised their hands. Even the guide was a little surprised. Later, we visited about that moment with one of the wait staff at a brew pub who also worked part-time at the local visitors bureau. She said that they, too, had noticed many more people requesting information this year. Good for Maine.